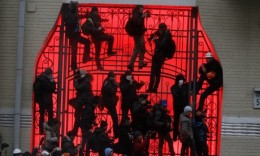 My attempt to set out a consistent ethnonationalist position on the Ukraine crisis [3] has provoked a good deal of debate.

The situation in Ukraine clearly illustrates that even very closely related peoples — Russians and Ukrainians — can be so divided by language and history that they are willing to shed one another’s blood. When such conditions arise, the most pragmatic and humane solution is the Czech and Slovak model of amicable divorce and partition, as opposed to the Yugoslav model of arriving at the same result through bloody warfare and ethnic cleansing.

Thus, I am all for Ukrainian nationalists who seek to chart an independent course for their nation. I understand their distrust of Russia and their desire to rid themselves of Viktor Yanukovych, and I hope they will also reject the US/EU/NATO as a false alternative. Ukrainian White Nationalists understand this already, and I hope they will convince more of their compatriots.

But according to the same ethnonationalist principles, I also think that it makes sense for the Crimea to leave Ukraine and re-join Russia. I think that it might make sense for the Eastern part of Ukraine to move in that direction as well. It makes far more sense for Russia to rule Crimea (in spite of its Ukrainian and Tatar minorities) than Chechnya and Dagestan.

I also made it clear that, although Vladimir Putin is my sentimental favorite in any clash between Russia and the US, he is no friend of ethnonationalism in Russia or anywhere else [4]. Furthermore, the Ukraine crisis does not present an either/or choice between Russia and the West, because there are actual ethnonationalists in Ukraine — namely Svoboda and Right Sector — who seek a nationalist third way between American and Russian domination. White Nationalists should be on the side of Svoboda, Right Sector, and an independent Ukraine. Because national self-determination is what we want for all peoples.

Both Svoboda and Right Sector, for instance, support maintaining Ukraine’s current borders. Both also support banning Russian as an official language of Ukraine. This seems rather “petty nationalistic” to me. But the rank and file supporters of even the most enlightened European nationalist parties include many individuals wedded to the worst petty nationalist outcomes. However, if I wanted to promote the partition of Ukraine on ethnic and linguistic lines, but could not say so, for fear of losing the support of petty nationalists, I might support similar measures — which do no real harm, but are highly symbolically potent — to heighten tensions, polarize the population, and hasten ethnic separation. And these entirely predictable consequences seem to be playing themselves out.

The principal disagreements with my position are the following.

First, it is claimed that Svoboda and Right Sector are in bed with, or even controlled by, “the Jews.” Astonishingly, the very same people who raise this objection have “no comment” about the fact the Putin enjoys cordial relations with Russia’s Jewish community, has prominently placed Jews in his government, and claims to be fighting against Ukrainian anti-Semitism. Why, then, is Putin not controlled by “the Jews” as well?

In fact, there are Jews on both sides of this conflict, as there are in every conflict, which is really what Jewish hegemony means: no matter what the outcome, they are always poised to profit. This does not mean that Jewish influence is benign, that we should ignore it, or that we should not be suspicious of politicians who associate with Jews. But it does mean that, by itself, the involvement of Jews proves nothing about the other agents in play or the likely outcome.

The news is not that a Jew heads the interim government in Kiev. The news is not that a Jewish oligarch has been appointed a governor in Ukraine. The news that that Svoboda — one of the most radical nationalist parties in Europe, which includes National Socialist, New Right, Traditionalist, and Jew-wise elements — is also in the new government. The news is that Svoboda and Right Sector members took to the streets, risked life and limb, and were instrumental to bringing down the Yanukovych government. Western White Nationalists should be applauding our Ukrainian cousins for their courage and commitment — and asking ourselves what we can learn from them — not picking nits, straining gnats, and swallowing Putin.

Second, it is objected that Russia is the only power capable of countering US-dominated globalization, thus we must support Russia in this crisis, lest she fail and with her the last best hope for European man. Where to begin?

1. Russia is not the only power capable of countering the American drive to unipolar hegemony. Don’t count out China and India.

2. Russia will not disappear if she loses this round. Besides, Russia may have lost Yanukovych, but she looks like she is winning in Crimea, and Eastern Ukraine may also join her.

3. White Nationalists are the most disdained and powerless people on the planet (except in Ukraine, where they have ministers in the interim government). Our sympathies toward Russia, good or ill, have no power to affect the outcome of this crisis.

My eyes glaze over at sports analogies, but the psychologies of political partisanship and sports fandom are very similar. Both involve individuals imaginatively identifying themselves with a team. Once this identification is established, fans believe that simply by rooting for their team — even in their own living rooms — they can influence the outcome of the game. It is an essentially magical form of causality. Fans also feel the pride of victory and the dejection of defeat as if they were members of the team, rather than just passive spectators. Too much political commentary fits this description. Ardent partisans feel that the fate of nations hinges on the opinions of powerless people on the other side of the planet. So you’d better hold the right opinion.

But, given that White Nationalists are pretty much powerless (outside Ukraine, that is), what is the purpose of political commentary at all? I am not writing this because I think I can affect the outcome of the Ukraine crisis. I am writing this because, although White Nationalists do not have the advantage of money or political power, we do have the power of the ethnonationalist idea, an idea whose truth and relevance is demonstrated by the Ukraine crisis.

If White Nationalists can offer more credible analyses and solutions to political crises than the powers that be, that may well change the world. In any case, better ideas are the only advantage we have today, and it seems silly to throw that advantage away in favor of the swooning, delusional sycophancy of those who treat Vladimir Putin as the Second Coming of Jesus, Hitler, or the Beatles.

4. The more I know about Russia, the more I think that she is not an alternative to globalization, but just another form of globalization.

The United States is a menace to the world because it has become an imperialistic proposition nation with a messianic mission to impose the universal good of liberal democracy and decadent crap culture on the rest of the world. Of course, these ideals are only trotted out when they serve the interests of our ruling Jewish and plutocratic elite.

Both inside and outside Russia, there are ideologues [5] who wish to cast her as a socially conservative version of the imperialistic proposition nation, whose messianic mission entitles her to meddle with her neighbors whenever it serves the interests of her ruling elite. This concept of Russian identity has deep historical roots [6], and it is just as menacing to genuine ethnic self-determination as Americanism.

For a White Nationalist, ethnic identity and ethnic self-determination trump social conservatism. We prefer liberal Sweden to “conservative” Uganda. We prefer that sovereign peoples work out their own problems rather than have solutions imposed upon them. We want nothing of universal proposition empires, liberal or conservative. We want the ethnic core populations of both the United States and Russia to free themselves of these self-conceptions, which are a menace to their own ethnic interests as well as those of their neighbors.

Such views from White Nationalists are, frankly, surprising. Do they think that all attempts to create a nationalist alternative are futile? Or is the futility confined just to Ukraine? If it is the former, then why not just pack it in? If the latter, then what are we to make of the fact that nationalists are significantly more successful in Ukraine than in any other white countries?

There is a false certitude in these dismissals of Ukrainian nationalists. Some people just know that Ukraine will fall into the clutches of the EU and NATO. Some people are certain that Putin is unfolding some grand master plan. Such views underestimate the role of contingency and the unexpected in history. A lot can happen in Ukraine between now and the May 25th elections. And haven’t we learned that the outcomes of presidential elections can easily be reversed in Ukraine? As for Putin, he is just gambling, but he has a good poker face and knows how to project certitude and momentum. Given his opponents, he will probably win in Crimea.

The idea that we have to choose between Russia and the US, lest our “vote” be wasted, is the same argument that maintains the Democrat vs. Republican hegemony in the United States. And since there are no fundamental differences between the parties, that means that the same establishment holds on to power no matter which party wins election.

The ultimate political power is not the ability to win elections. It is the ability to frame every election so that, no matter what the outcome, the same people remain on top. Which means, for one thing, that everybody’s vote is wasted, because voting changes nothing. I call this kind of power “hegemony [7].”

The only way to break hegemonic power is to refuse to play a rigged game and seek instead to create alternative institutions.

From the Ukrainian nationalist point of view, both the US and Russia are threats to national sovereignty. Instead of taking one side or the other, Ukrainians need to take their own side [8] and build a genuine alternative. That is what Svoboda and Right Sector are doing in Ukraine. It is what White Nationalists should be doing everywhere.