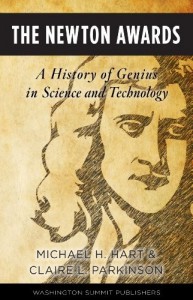 [1]Michael Hart and Claire Parkinson
The Newton Awards: A History of Genius in Science and Technology [2]

The Newton Awards (TNA) is both an ordinary and also quite odd book consisting of 142 short well-written chapters each profiling one or more scientists or engineers in chronological order from 1600 to 2000. In that sense it’s a useful reference for those profiled and resembles similar references on great musicians or sports figures.

The book’s Introduction pretentiously compares itself to the Nobel Prizes, however, even though no actual awards are given to its subjects beyond the honor of being profiled. In that sense it most resembles and may have been inspired by the book series called The Darwin Awards which gave faux awards for dumb behavior deserving removal from the gene pool. TNA is their reciprocal for smart behavior.

The oddest thing about the book is that its publisher is Washington Summit, an affiliate of the National Policy Institute (NPI), which is “dedicated to the heritage, identity, and future of European people in the United States and around the world.” It’s hard to see how TNA contributes to that cause beyond the trivially obvious fact that modern science and engineering are creations of European people. That’s scarcely mentioned by TNAs authors, however, and was treated much more thoroughly and explicitly in the mainstream book Human Accomplishment by Charles Murray published by Harper Collins, which undoubtedly reached a far wider audience than TNA can ever hope to.

Washington Summit’s rationale for publishing TNA might be more evident if it highlighted scientists like Philippe Rushton who identified the biological distinctiveness of European peoples, but these are completely absent. If their marginalization and resultant obscurity might excuse that, the same can’t be said for another missing biological genius E. O. Wilson whose achievement uniting biology with human affairs through sociobiology rivals Darwin and Mendel and is universally recognized for its profound scientific significance. Other immensely significant biologists missing from TNA are Francis Collins and Craig Venter who decoded the human genome and Kary Mullis who discovered the polymerase chain reaction that made great advances in genetic identification possible for the first time. Instead one of the few biologists TNA includes from the modern era is Stanley Prusiner, discoverer of the obscure pathogen causing mad cow disease. Prusiner, like many of the recent TNA awardees and unlike the missing great biologists, is ethnically Jewish.

I first became aware of TNAs senior author Michael Hart at the 2006 American Renaissance conference when I learned he was the short, rotund, stereotypically Jewish- looking man screaming curses at David Duke, who had politely asked the speaker a question. Later I learned Hart authored a reasonably good amalgam of anthropology, human biology, and world history called Understanding Human History (UHH) also published by Washington Summit. Since then I’ve seen Duke at no more public conferences while Hart participated in good standing at the 2013 NPI Conference.

Any rational analysis of threats to the European people NPI is dedicated to preserving must recognize a primary threat to their survival is displacement by rapidly expanding populations from tropical areas, which 94 years ago Lothrop Stoddard called “the rising tide of color.” It must also recognize this phenomenon is aided and abetted everywhere except in Israel by an ethnically conscious anti-European Jewish elite that hegemonically dominates the United Sates and its allies.

David Duke thoroughly discusses and acknowledges both these facts in his book My Awakening, but Hart only the latter since in UHH he treats Jews as an utterly benign group distinguished only by exceptional smartness.

Duke has apparently awakened quite a few more people than Hart since his book is 530,504 on the Amazon list while UHH is 616,800 and TNA only 1,655,067. The role of machine guns in decimating European people during World War I is discussed in UHH so it’s more than a little strange for Hart to give their inventor an honorable mention genius award in TNA. Even stranger is his full award to the two Jewish inventors of the hydrogen bomb, which if ever used in conflict between Russia and the West would likely be the final end of European people.

NPI is a fine well-intentioned organization, but publishing TNA is just one of several disturbing trends in its current direction. At its 2013 conference discussion of either race or Jewish influence were nearly as taboo as in a politically correct college town. It was as if avoiding them could bring mainstream acceptance, which it won’t. The pessimistic theme, “After the Fall” about dealing with defeat generated a program light on facts and specifics but heavy on generalities and philosophy in a lush setting hardly suggesting a defeated cause.

Some talks like Alain de Benoist’s critique of globalism were excellent but others much less so. One speaker even channeled the conference’s theme so thoroughly that he claimed pessimism is a more defining feature of European people than racial characteristics like whiteness. More than one speaker called for a goal of maintaining hierarchy as if still defending the Old Europe of the Hapsburgs from Napoleon’s imperial Enlightenment, something less than appropriate for a people living under an oppressor’s iron heel. The better message of preserving human biodiversity by enhancing barriers between tribes able to enjoy internal equality was expressed at the conference by Roman Bernard’s report on Europe’s Generation Identitaire movement.

An unfortunate conference feature was the scarcity of women in the large audience. Any future for European people depends on mothers and families, but these were scarcely seen. What’s appropriate in a shooting war is not in this war of words. Some may have felt unwelcome in what seemed to them an atmosphere of misogyny. Conference talk of a “manosphere” where women are as superfluous as men in feminism can’t have helped, especially when feminism’s damage to families and ultimately European people has been so effectively fought by women like Phyllis Schlafly and Maggie Gallagher.

Most disappointing was the conference’s lack of facts and specifics just when these should cause optimism instead of pessimistic defeatism. New human genome knowledge is finally ending the false claim human differences are only skin deep. Brutal human rights violations and warmongering increasingly make a global pariah of an Israel joined at the hip to our oppressive ruling class. Russia is emerging as a champion of traditional European values despite demonization by that ruling class. And finally localism and identity are rising everywhere to challenge failed globalism.

This is intended as constructive criticism of the NPI, a fine organization whose journal Radix is one of the best ever published. If NPI fell a bit short at its 2013 conference and even more so in publishing a flawed book like TNA it can hopefully only do better in what can be a bright rather than a bleak future.