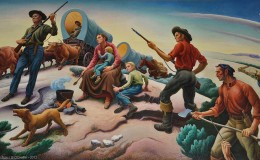 Thomas Hart Benton, “Independence and the Opening of the West,” 1961

Writing for Cato Unbound, Mark Weiner, author of The Rule of the Clan [2], recently made several correct observations about the problem of reconciling statelessness or “small government” with American conceptions of individual liberty.

Many of my readers tend toward libertarianism, and I favor libertarian ideas by default. As a natural-born American, it’s in my DNA. You know what I’m talking about. [3]

However, I also think it’s important to look at how the State makes this swaggering self-conception of the romantic one-against-all rugged individualist possible, and how this modern anti-clannishness actually makes the individual more dependent on the modern State.

To begin, let’s look at Weiner’s essay, and go over what he got right.

What Weiner calls “rule of the clan” is similar to the male group mentality I identified in The Way of Men [4]  as “the way of the gang.” Weiner admits that the “rule of the clan” is a natural, universal form of human organization which exerts a “gravitational pull,” and that it is the object of modern liberal government to resist that pull. He defines the “rule of the clan” first as a society based on kinship, but notes that extra-genetic kinship is possible, and points to the existence of gangs and criminal brotherhoods which inevitably form in the smooth, derelict spaces [5] of failed or impotent State influence.

Weiner is also sharp for making the distinction between the modern, liberal idea of honor, which is a self-imposed standard of moral goodness, and the clannish or traditional idea of honor, where individual honor is linked to both the reputation of the group as a whole and the individual’s reputation within the group. He reduces and degrades this primal, tribal form of honor with a vulgar financial analogy, but recognizes that group honor enables group autonomy and group independence. He also recognizes the profound benefits offered by group identification. In his words, the way of the clan “fosters a powerful sense of group solidarity,” “gives persons the dignity and unshakable identity that comes from clan membership,” and “generates a powerful drive toward social justice — a political economy that prizes equality.”

Weiner’s admission of the benefits of clannishness is significant, because he sums up many far-right and reactionary criticisms of modern liberalism and globalism. The prices of liberal, globalist modernity include rootlessness, detachment, an emptiness and desperation for identity that is easily exploited by commercial interests, a lack of community, and a lack of intra-national loyalty that encourages financial greed and insulates elites from the social responsibilities of nobility and the social penalties for betraying their kin, neighbors and countrymen. As the modern, liberal State is easily influenced by large amounts of money, it also insulates the wealthiest individuals from taking physical responsibility for their crimes and betrayals.

Can there be any doubt that it is only the armed protection of the State that has made it possible for the gun-grabbing billionaire Michael Bloomberg to escape a spectacular skyscraper defenestration?

Weiner argues that the modern libertarian idea of individualism, “the modern self” — which generally includes a freedom from responsibility to clan beyond the immediate nuclear family and voluntary instead of mandatory association with groups — is a in fact a product of state development which owes its fragile sense of individual autonomy to the legal protections provided by the state and the conditions of modern life.

This makes perfect sense to me, because I’ve never understood the weird, crypto-religious libertarian obsession with the idea of “natural rights.”  I have always understood “rights” as a bargain between rulers and subjects, or in the case of the American democratic ideal, between “the people” and “their” government. In nature, men have no rights. There are no police to call and there is no mechanism to sue any entity that has wronged you or “infringed upon your natural rights.” This is why the primal form of human organization is not the pioneer nuclear family of libertarian individualist fantasy, but the patriarchal clan or tribe or gang of men who unite to provide coordinated protection against danger, and a communal mechanism for righting wrongs or resolving disputes. How “fair” or “just” these tribal systems of resolution and retribution actually are is varied, culturally relative, and subject to taste.

Weiner has concluded that, for the liberal state to thrive and continue to deliver on its promise of individual freedom and autonomy, it must do a better job of doing the things the clan has always done better. He suggests that the state “pursue policies that moderate economic inequality,” “provide space for the flourishing of voluntary civil society organizations that provide opportunities for solidarity,” and “ensure that individuals have fair opportunities to exercise their autonomy within the marketplace,” whatever that means.

At first glance, his suggestions sound OK, if you’re into that whole “saving the modern liberal state” thing.

However, after a closer look, they quickly become unworkable. He is also overindulgent of the fictions of the modern State, and he barely mentions the biggest elephants in the room.

When the State pursues policies that moderate economic inequality,  to do so, it must become more nationalistic — more clannish, even — not more economically libertarian. A chief contributor to economic inequality in America is surely the ability of corporations, wealthy individuals, even small businesses to undercut American labor and outsource it to foreigners. A little more economic protectionism and certain degree of nationalistic isolationism might go a long way in the long term, but would be damaging to “the economy” in the short term. American politicians are necessarily short-term planners, because they are held accountable in the short-term, so the likelihood of American politicians acting to serve the long term good of the nation while cutting off a foreign supply of cheap labor for corporations, wealthy individuals and small business owners in the short term is approximately zero. This is probably why, for all of their populist posturing about getting tough on immigration, and despite widespread popular support for immigration control, conservative politicians almost always fold.

When Weiner says he wants the State to “provide space for the flourishing of voluntary civil society organizations that provide opportunities for solidarity,” that sounds good, but the reality is that the State as it currently exists would end up micromanaging these organizations to the point where no one would actually want to be members of them anyway. The alternative would be the State creating space for organizations which, if left to flourish organically in harmony with human nature, would eventually challenge the authority of the State itself. Surely, no explicitly kin-oriented groups could be encouraged, especially for white people, because that would be racist. No groups that exclude women could be allowed, because that would be sexist. And the more the State intervenes to regulate and sanction the activities of individuals who associate voluntarily, the more laughable this whole idea of individual autonomy within the context of the State becomes.

What Weiner really fails to acknowledge with this suggestion, even though it is implicit in everything he has written, is that opportunities for “solidarity” and truly meaningful group bonding are a threat to the State, which exactly why there isn’t more room for them now.

People already express group solidarity in ways that are acceptable to the state and its corporate sponsors. They become sports fans. They invest money and time and emotional energy in a group identity that revolves around the dramatic but completely inconsequential activities of, usually, a gang of men.

If men put the same amount of time or energy into forming a highly visible organization with ethnic concerns, for example, half of their enthusiastic new members would probably be FBI agents, because that kind of loyalty would threaten the interests of the liberal state by creating an alternative — and clannish — network of support. The power of the liberal state depends on dependency, and as Weiner has noted, even libertarianism depends on it to protect “rights” and “liberties.”

Finally, in his ode to the State, Weiner perpetuates the fiction that the American State is some kind of benevolent expression of the will of its citizen voters, and he all but ignores the most powerful actors in American politics: corporations. Corporations amass enough money to fund, manufacture and distribute the scientific miracles we use on an everyday basis, but they also perpetuate their own amoral existences by using that money to buy and exert influence on the American political system, whether they are American or foreign-based corporations. Because corporations can exert so much more influence on politics than any voter, the modern liberal state has become a tool of corporate interests, not as Weiner idealizes, a guarantor of individual liberty.

The clan, gang or tribe poses an economic threat to corporations by creating alternative support systems, reduced consumption of goods produced extra-tribally, and the possibility of supply-chain disrupting inter-tribal violence or violence against the State. The State will always oppose clannishness because the state responds first to the interests of self-perpetuating legal entities known as corporations, and because the State is, itself, a self-perpetuating legal entity that will, like any fundamentally amoral corporation, act to perpetuate its own survival above all other concerns.

If the State is over-reaching and becoming the biggest threat to the liberties it supposedly protects, as many men with libertarian tendencies now believe, the solution is not a return to the atomized, go-it-alone individualism that ultimately relies on the liberal State. The only viable option is to increase clannishness or tribalism, which Weiner correctly identified as the natural counter to the modern liberal State.