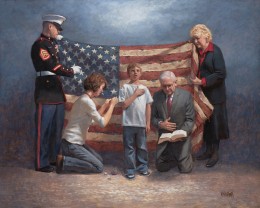 The dénouement came with the election of Barack Hussein Obama. It changed nothing in the structure of real power. The same people controlled the American regime both before and after Election Day 2008.

But the symbolic importance of a black man being inaugurated as head of state in a capitol city named after a white slaveholder had a power all its own. Blacks in America shrieked on social networking sites that they “owned” America. Liberal whites cried in delight and basked in their own self-satisfaction. And conservative whites finally had that vague sense of occupation that liberals felt when the White House was controlled by the likes of Nixon, Reagan, or George W. Bush.

Of course, it was business as usual in the national security deep state, the financial system, and the media. But under the Obama Administration, the civic creed of multiculturalism, anti-racism, and diversity took on an increasingly frantic, even unhinged tone. Every mild racial insult, expression of political incorrectness, or “coming out” of a worthless celebrity was cause for hysterical condemnation or celebration.

There was a hint of North Koreans’ forced grieving for Kim Jong Il in Americans’ reaction to the death of Nelson Mandela. Terms like “cisgender” and “white privilege” became part of the conversations of ostensibly normal people. American society increasingly resisted satire, as college students were animated – even outraged – by the existence of separate restrooms for men and women. And within the media, opposition to gay marriage was treated as all but equivalent to support for racial segregation.

There are no limits to this process. Nor should Americans be surprised. The tragedy of America is that ideas are eventually taken to their logical conclusion.

The American nation is being killed by the American Dream. As George Carlin once said [2]: “They call it the American Dream because you have to be asleep to believe it!” Of course, this was at the end of a long rant about how “the owners” of the country, by which he meant the rich white males who tell us all to believe in God and want obedient workers, actually propagate this idea to defend their economic interests. The mostly liberal crowd therefore felt free to applaud.

The American Dream defines what we are as a country. The concept has many meanings, but at its core, it’s the idea that this country gives a person, regardless of his background, the opportunity to break whatever bonds are holding him back, be it poverty, stultifying tradition, or government repression. In so doing, he can build the life of his dreams – the unhindered “pursuit of happiness.” Often, this centers on material progress – sometimes, something so literal as saying, “the American Dream is home ownership in the suburbs.” After all, in George Mason’s less poetic formulation, classical liberalism is about “life, liberty, and property.”

The Beltway Right insists that this Dream still exists for everyone. In this telling, on some glorious day we will all become job creators and small business owners. To use a slogan the Republicans deployed during the 2012 Presidential elections, we “built that” independent of society. To question this is to attack the core idea of the country, to be un-American. Indeed, one of the most common attacks of Republican presidential candidates against President Obama is the idea that he doesn’t believe enough in American Exceptionalism, the idea that America is unique, somehow more unique than every other country in the world.

The Left, of course, says that the Dream isn’t fair enough, since class divisions and racial differences exist. There is patriarchy, and white privilege, heteronormativity, cisgenders, and all the rest that are eternally “holding us back.” And new enemies of the people are always being created.

However, the core idea for the two groups is still the same: self-creation and the acquisition of wealth by everyone is the definition of the good. The Beltway American Right holds to the faith that this essential equality and economic opportunity exists and will always exist, all evidence to the contrary.

Meanwhile, the Left seizes the reformist mantle. They can never be satisfied because there will always be inequality, which the American Right concedes is bad. Thus, the Left has an eternal claim on the moral high ground.

Both sides agree with the profoundly anti-Traditionalist idea that America is nothing but a place to make money.

Yet despite this core ideological agreement, the political debate in America is driven by something primal under the surface. The Left insists that there must be government men with guns to ensure “everyone” (especially non-whites) gets an equal shot. At the same time, the Left permanently defines the existing capitalist system as a racist, patriarchal system that is run by white men. The Left simultaneously has a monopoly on an ideological defense of the current system and the language of revolution.

Or, in the words of Rage Against the Machine, “For it’s the End of History, It’s Caged and Frozen Still, There is no other Pill to take, so swallow the one that made you ill.” In this view, radical, individualist capitalism is unjust precisely because it is rooted in racism – economic differences are simply a consequence of racial injustice. The band goes on to rant about the Niña, Pinta, and Santa Maria, and the noose and overseer and the never ending exploitation of the noble colored masses by the White Man. This is essentially the pattern of all contemporary American progressive activism. Justice will arrive when the white men hands back his ill-gotten gains.

In response, simple reactionaries that they are, the Beltway Right defends the system against these attacks. To some extent, they accept the Leftist critique that the existing capitalist system is the property of whites – they simply deny that this is unfair and claim that everyone, of every race, can gain admission to the American Dream and the goodies it contains. They even do this as the economic elite of the country grows explicitly anti-white, both funding and executing anti-white affirmative action policies, agitating for unlimited Third World immigration, and eagerly promoting an ever more destructive cultural agenda. The conservative response is generally to call for more tax cuts. It is an opposition doomed to fail – perhaps even designed to fail.

But even though this political struggle is nothing but shadowboxing, the rhetoric and emotions raised seem to grow more savage each election cycle. This is because there remains a residual American patriotism recognized by both sides in the culture war. The Beltway Right has claimed it; the American Left is suspicious of it. Even though the Beltway Right defends America largely on economic grounds, the emotional motivation underlying it is rooted in deeper cultural and implicitly racial beliefs about what constitutes the authentic American identity. The flag, the military, and certain motifs of what Peter Brimelow calls the historic American nation still resonate as either a positive example or something to be feared.

The conquest of the West. The Marine Corps. The Founding Fathers. All of these are mythologized by conservatives and demonized by liberals. And if anything, this kind of implicitly white patriotism is increasing among European-Americans.

Glenn Beck has built a hugely profitable internet and radio media empire that positively fetishizes the Founding Fathers. The American Revolution is undergoing a dramatic spike in interest in the publishing industry. A huge implicitly white political movement borrows the symbolism of the Boston Tea Party.

And yet while all this is going on, no one on the mainstream Right would ever recognize – let alone defend – a distinct European-American identity and collective interest. At the same time, even as the Left is ever more eager to call the American Right “racist,” its policy prescriptions are still grounded in the traditional American rhetoric of “freedom” and “equality.”

Both sides are discussing trivia in the tax code, debt, and health care, both sides are motivated by primal racial and cultural motivations that neither dares recognize, and yet both are arguing within a broadly shared context of values of “freedom,” “equality,” and material prosperity.