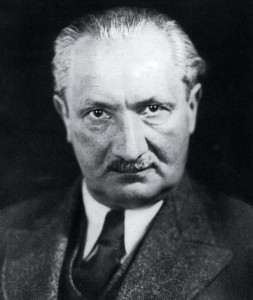 In December of 2013, the German and French press began reporting that Martin Heidegger’s so-called Black Notebooks (Schwartze Hefte), forthcoming as volumes 94 to 96 of his Gesamtausgabe (Complete Edition), contain passages that constitute an anti-Semitic “smoking gun” (or maybe just a smoking chimney [3]).

On Monday, March 3, I received the first volume of the Black Notebooks, more than 500 pages written from 1931 to 1938. The second and third volumes, which have just been released and are in transit, contain writings from 1938 to ’39 and 1940 to ’41. All told, the three volumes contain more than 1,200 pages of Heidegger’s most private philosophical musings, the seeds of many of his contemporary and later lectures and writings.

It turns out that the passages in which Heidegger discusses Jews are found in the second and third volumes of the Black Notebooks (as well as in volume 97 of the Gesamtausgabe). Professor Peter Trawny, the editor of the Black Notebooks, has also written a small volume, Heidegger und der Mythos der jüdischen Weltverschwörung (Heidegger and the Myth of the Jewish World Conspiracy), which is due out this spring and which quotes and discusses the passages on Jews from volumes 95 to 97.

I will read and review these books in good time, but based on the quotes leaked so far, I predict that these passages will do little harm to Heidegger’s philosophical reputation.

Heidegger is still the most influential philosopher of the 20th century, despite the fact that it has long been known that he joined the National Socialist German Workers Party in 1933 and remained a member until 1945. It has, moreover, long been known that Heidegger spoke against the “Jewification of German intellectual life” (Verjudung des deutschen Geisteslebens). But, we are told, Heidegger was only a “spiritual” or “cultural” anti-Semite rather than a racial one. Beyond that, Heidegger opposed displays of vulgar and petty anti-Semitism while he was Rector of the University of Freiburg. It is also cited in Heidegger’s defense that he cheated on his German wife with Hannah Arendt, who was Jewish, and with Elisabeth Blochmann, who was half-Jewish.

Now, however, based on leaked lines from the Black Notebooks (that maybe amount to 1 or 2 pages out of 1,200), Heidegger’s detractors are claiming that this proves that anti-Semitism was not just a matter of “private insights” but that it is “tied to his philosophy [4],” indeed it is at the “core [5]” of Heidegger’s thought, that Heidegger’s Nazi problem is “deeper” and “bigger” than had been thought, that this constitutes a “debacle [6]” for contemporary Continental philosophy, and that from now on, it will be “hard to defend [6]” Heidegger.

Of course we need to take this all with a grain of salt, since the sources of these comments are (1) Heidegger’s publishers, who, I believe, are cynically using this controversy — abetted by Heidegger’s gleeful detractors — to create advance publicity and sell books — and with great success, since before they were even released, the Black Notebooks were philosophical bestsellers on Amazon.de; (2) Heidegger’s editor Peter Trawny, who has a book of his own to sell; and (3) journalists who love controversies.

I predict that after Heidegger’s actual remarks and Trawny’s commentary are finally released, and hundreds of thousands of Euros have changed hands, and thousands of readers have weighed the evidence: (1) we will have learned some new details about Heidegger and the Jews but nothing that will alter the existing picture, (2) both Heidegger’s defenders and detractors will be confirmed in their existing opinions, and (3) and some observers of the intellectual hysteria and thuggery surrounding even a whisper of anti-Semitism might conclude that Jewish power and freedom of thought are incompatible. That conclusion certainly began dawning on me as I read my way through the last controversy about Heidegger and National Socialism, which was launched in 1987 by Victor Farias’ Heidegger y el Nazismo.

The real issue is whether Heidegger thought that his philosophy could transform National Socialism into an intellectually coherent, philosophically grounded movement, a movement that understood its “inner truth and greatness” (as he put it in 1935), namely the confrontation of historical man with global technological civilization.

And the answer to this question is clearly: yes. Heidegger thought that his philosophy could provide the foundations for a kind of National Socialism — which is, by the way, one of the reasons for his enduring influence on the New Right.

Now it appears that Heidegger also turned his attention to the Jewish question. Again, it is a mistake to read too much into a few leaked lines, but we are told, for instance, that Heidegger speaks of Jews as “rootless” and “calculating,” which for Heidegger are general traits of modernity. But it is not yet clear whether Heidegger regarded Jews as the subjects or the objects of modernity, or both.

Heidegger apparently regarded Jews as hypocritical insofar as they live according to the principle of race (Rasseprinzip) but attack Germans for seeking to do the same. Heidegger also reportedly notes that Jews foment wars to advance their interests but are loath to shed their own blood.

Such remarks instantaneously transform modern liberal journalists into elderly Victorian spinsters, clutching invisible cameo brooches at their throats as their cheeks blanch (the original meaning of “appalled”) and all ratiocination is paralyzed by the vapors. But a quick comparison of Jewish political preferences [7] in the United States and Israel proves the hypocrisy charge, and a cursory knowledge of Jewish lobbying for the US to attack Iraq, Iran, and Syria [8] proves the warmongering charge. Nothing, apparently, has changed.

In the initial reception of the Black Notebooks — as with everything else in European and American life — the tiny Jewish tail is wagging the dog. But when scholars turn their attention from a few sentences about Jews to the 1,200+ pages of other material in the Black Notebooks, the contrived controversy about anti-Semitism will be quickly forgotten. For, judging from the first volume, there are materials here of far greater importance.

For instance, in volume one, the second notebook (entitled Überlegungen und Winke [Reflections and Hints] III) begins in the fall of 1932 and runs through the spring of 1934, i.e., the entire period of Heidegger’s most intense political involvement with National Socialism and his Rectorship at the University of Freiburg. It is, in truth, the diary of a dissident National Socialist.

The opening words express high hopes: “A glorious awakening popular will stands in a great world darkness” (p. 109). Heidegger outlines plans for reforming the university system. But he had far greater ambitions than that, namely, to put National Socialism upon firm philosophical foundations, namely, his own philosophical foundations: “The metaphysics of Dasein must according to its innermost structure deepen and broaden into a metapolitics ‘of’ the historical people” (p. 124).

Heidegger also records his frustration with the Rectorship, which eventually led to his resignation. On April 28, 1934, the day after his resignation was accepted, he writes “The end of the Rectorate . . . Long live mediocrity and clamor [Lärm]!” (p. 162). The final page is a confession of despair: “‘The Self-Assertion of the German University’ [the title of Heidegger’s Rectoral Address] or — the small intermezzo in a great error” (p. 198). He foresees the complete absorption of the university by technical-instrumental modernity — and, by implication, the absorption of National Socialism itself, betraying its potential to offer a real alternative.

Scholars will be discussing these and other issues raised by the Black Notebooks long after the Lärm about anti-Semitism has died away.

Judging from the first volume, the Black Notebooks are where Heidegger initially drafted many of the ideas that characterize his later thinking. And, as with his lecture courses, they are expressed with great clarity and directness, poles apart from the contrived obscurity of many of the works he published in his lifetime, as well as posthumous works like Contributions to Philosophy, all of which read “like some evil incantation in gibberish,” as Flannery O’Connor put it in “Good Country People.”

Heidegger stipulated that the Black Notebooks and related texts be published only at the end of this Complete Edition. I think he was saving the best for last.