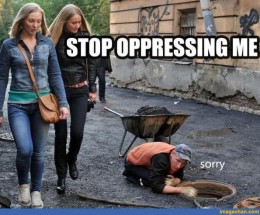 When Camille Paglia’s speech “It’s a Man’s World, and It Always Will Be [2]” was published in Time magazine, my feeds and inboxes overflowed with approving links and comments.

“Finally, someone in the mainstream media is speaking some truth about men.”

The Time piece was actually a transcript of Paglia’s opening statement at a debate between feminists in held in Canada [3]. The resolution in contention was that, in the 21st Century, “men are obsolete.” Hanna Rosin, author of The End of Men, and Maureen Dowd, author of Are Men Necessary?, held that men are, in fact, obsolete. British columnist Caitlan Moran and Paglia disputed the claim. Rosin and Dowd won the debate because they gained more ground in the presumably already progressive audience — they were Canadian, after all — even though more than half still disagreed with the resolution.

I’ve long been a fan of Paglia’s bold, fiery style. Anything she writes is well worth reading. She’s a tough-talking broad who stands up to her prissy, parochial counterparts and waves away their campus-cooked hysteria. What’s more, as an art history professor, football lover and “born-again pagan,” she maintains a certain reverence for heroic narratives of masculinity.

Paglia is something of a reactionary — within feminism. She looks back to the beauty and grandeur of the past with a sense of loss and acknowledges the cyclical nature of history. She points out the different natures of the sexes instead of trying to paper over them with propaganda, so truth does shine through her work.

Paglia is like a reactionary in many ways — but she’s still a feminist. In one of her finest and most accessible essays, “No Law In the Arena,” she wrote, “It is woman’s destiny to rule men. Not to serve them, flatter them, or hang on to them for guidance. Nor to insult them, demean them, or stereotype them as oppressors.”

But, still, to rule them. This is a step farther than most mainstream feminists would venture outright. In plain words, they tend to tuck themselves under the moral umbrella of “equality.” If Paglia truly believes it is the destiny of women to rule men, she never quite explains how men will be ruled.

In “It’s a Man’s World,” Paglia gave men their due for being the architects of modernity, and reminded women that it is still mostly men who do the dirty work that makes the global economy — and presumably the air-conditioned corporate world where career gals are winning — possible. Bossy [4] businesswomen like Sheryl Sandberg can “lean in [5]” all they want, but you don’t see them jumping to do dirty jobs [6] with Mike Rowe.

Paglia has expressed her appreciation for men as builders before, and Helen Smith riffed off them throughout her recent book Men on Strike: Why Men Are Boycotting Marriage, Fatherhood, and the American Dream – and Why It Matters [7]

. Smith is a Tennessee psychotherapist who often writes about men’s issues on her blog at PJ Media [8]. Like Paglia, when feminists berate men as stupid beasts, or self-congratulatory urbanites like Rosin call them obsolete, Smith steps in to say “hold on a minute, men aren’t all bad — look at what they do for us.”

Smith means well. Though Men on Strike opens with the cringingly condescending line “This book is not for wimps,” I do believe that Smith truly wants to help men level the playing field and address the injustices, inequalities, and double standards rampant in a culture where “more justice” and “more equal” usually translate into “more of whatever feminists want.” Men on Strike works as a speedy, charitable summary of the legal and cultural changes that are causing more and more young men to avoid marriage, college, careers, and civic involvement. Smith’s book is overly reliant on recycled media quotes and blog comments, and the awkwardness of a middle-aged woman approaching young men in the gym and in bars to strike up conversations about men’s issues is hard to miss. I can and do have those conversations organically all the time with men who bring up those issues on their own and who aren’t filtering their responses for female interviewers. Men on Strike could be an eye-opener for men who are older and don’t understand how much the game has changed for young men, or for men who are still plugged into the politically correct academic mindset. The book was aimed at men, but it would be more useful as a starting point for sympathetic female allies, like Smith.

However, the sympathy of well-meaning feminist women will, necessarily, have its limits

I’m not sure if Smith would call herself a feminist or not. Like Paglia or Christina Hoff Sommers, she might feel the need to qualify her feminism [9], but she would surely concede that she is a feminist at the most basic level. Like the majority of modern American women, she still believes that women and men should have equal political influence and economic opportunities. She’s no capital -“t” Traditional woman, that’s for sure.

In an entertaining column for [10]New Statesman [10], feminist Laurie Penny recently wrote about “angry gentlemen who seem to think that there is a set amount of privilege to go around and that if they have less of it, someone else must have more.” Anarchist writer R. J. Jacobs [11] astutely remarked to me: “replace ‘privilege’ with ‘power.’” Penny, who was once shortlisted for an Orwell Prize [12]should know that when “equality” is the primary aim, some folks inevitably end up “more equal” than others. Because the equality of women is more important to the State today than the equality of men, women will be given more privilege and more power. The iron truth is that there is only so much power to go around. Feminism uses the state and social shaming to restrict the ability of men to exert power over women, so that women can have the opportunity to exert more power.

Feminists like Paglia and Smith have sympathy to offer men, but not change. Like good, well-educated women, they want to “raise awareness [13]” about the struggles men face, but they have no intention of ceding any privileges or power to them. They want women to appreciate all of the hard, heroic and dirty work men do for them, but they have no intention of changing a feminist system which, by its very nature, cannot offer men the same opportunities for reward, status, and esteem in return for their sacrifices that Smith herself admits patriarchal systems offered. Paglia and Smith are right to recognize that the back-breaking work of men has made genteel corporate feminism possible, by way of globalism and industrialization, but because they can’t offer men status or glory or “privilege” in return, all they have to offer is polite appreciation and a comforting, if patronizing, smile.

“Can we get a round of applause for these poor men who do all of the jobs you can’t or don’t want to do?”

In this way, for all of their good intentions, Paglia and Smith remind me a bit of the kind of spoiled-but-penitent Californians who want to remind each other what “A Day Without A Mexican [14]” might be like.

“Who will mow your lawns, unload your trucks, build your buildings, haul your trash, drive your ambulances . . . who will guard you while you sleep?”

Paglia believes that it is the destiny of women to rule men. Perhaps this is how she imagines they will do it — as benevolent overmoms and matriarchal middle managers who offer men a pat on the head for doing their dirty chores.

Are men the new Mexicans?