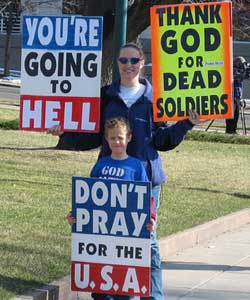 Westboro Baptist Church of Topeka, Kansas is probably the most infamous church in America. The typical reader might know them as the “God Hates Fags” church. WB has gained notoriety in the US by holding up outrageous signs outside funerals. Fall from Grace [2]

is a documentary on the group made up of interviews both from members and adversaries.

A Movement from One Man’s Loins

The background of Westboro Baptist is more interesting than anybody would’ve expected. Church founder Fred Phelps graduated from his Kansas high school at the top of his class at the age of 16. He went on to become an influential civil rights lawyer but was disbarred for reasons that the film never makes clear. (According to a Mother Jones article on Phelps, it was for “allegedly being too abusive to witnesses.”) Westboro Baptist was founded in 1955, but it wasn’t until the early 1990s that Phelps started to see acceptance of homosexuality as the thing destroying America.

According to critics, the only members of  Westboro Baptist are Phelps, his descendants, and their spouses. The man had thirteen children. According to  [3]Mother Jones [3], eleven of them have law degrees themselves, and as of 1999 there were 45 grandchildren. Of the original thirteen offspring, all but four are still affiliated with the church. Two agreed to be interviewed for Fall From Grace and accuse their father of child abuse. The pastor’s children who are still loyal to him deny the allegations.

The church’s first political battle took place in 1991. They felt that Gage Park in Topeka had been taken over by “fags” and pestered the city about it. Westboro Baptist started protesting locally anything related to homosexuality, like the funerals of people of suspected of dying of AIDS. Picketing Matthew Shepard’s funeral and harassing his parents in 1998 brought the group national attention. The movie shows a page from WB’s website that says “Matthew Shepard has been in hell for 2631 days” with “Eternity – 2631 days = Eternity” under it. Since then, anything that could focus the media on the group has been seen as a good excuse for a protest. Part of the thinking goes that America is a damned country, so anything that causes her people to die is something to celebrate.

The shrewdest PR move, if notoriety is the goal, has been protesting the funerals of US soldiers. Among the signs held up are “THANK GOD FOR 9/11″ and “THANK GOD FOR IEDS.” In the 1990s, Phelps’s church was attacked with an IED. Since the device is now the number one killer of Americans in Iraq, Westboro members are convinced that the wars in the Middle East are God’s revenge on America. [4]The term “hate group” gets thrown around a lot, but in the case of Westboro Baptist Church the term is accurate, as indicated by signs like “IT’S THE FAGS STUPID,” “FAGS DIE GOD LAUGHS,” and the honest “GOD HATES YOU.”

Their theology is a form of Calvinism that holds that man is naturally depraved and only a select few are saved. The church’s FAQ answers the question [5] “Doesn’t the Bible say that God loves everyone?” with a “No,” followed by an explanation. Westboro Baptist’s members feel that they are commanded to tell people they’re wrong, even if doing so is useless, since who is saved and who is damned has already been decided from the beginning of time.

Although I lost my faith long ago, I found myself taking a liking to Pastor Phelps and his church. There is something incredibly inspiring and, well, manly about a God filled with such hatred and wrath. Phelps came across as a real man, especially when contrasted with advocates of the hippie Jesus who were interviewed in opposition to him.

It’s pretty remarkable that nine out of thirteen of the founder’s children stayed with the most hated church in America. You usually can’t count on your kids sharing your political and theological beliefs in this day and age. For example, two of Ronald Regan’s four children became liberal activists. Phelps, whether through beating his kids or merely through the sheer force of his personality (aided, perhaps, by genes predisposed to accept authority), made sure his offspring followed in his footsteps. One daughter had ten kids. (Reagan, for comparison once again, had zero grandchildren.)

Phelps is an alpha at an almost supernatural level, akin to Brigham Young or Mohammed. He didn’t even need to find followers; he made them!

At one point Phelps is asked why he protested at the University of Kansas. He replies “Picketing KU at any time is good. I mean, that’s a hotbed of fag (suppressing a laugh) activity.” You get the impression that the Phelps clan is pissing people off because it’s fun and would do the same if they didn’t believe in God. One interviewee sticks out: a young woman named Sara, a granddaughter of Pastor Phelps. A well-spoken, attractive girl, she has a barely concealed smile when talking about the “fags” taking over.

One thing that’s for sure is that Fred Phelps is evolutionarily successful. White culture expects parents to raise their own children, and those who can’t afford kids are less likely than non-Asian minorities to have them. With a religion that boosts the fertility rate of the upper class, there may be eugenic breeding going on in Middle America. And while the theology of Westboro Baptist may alienate many people, I can’t help but consider revulsion towards American culture, no matter how impolitely expressed, as healthy.