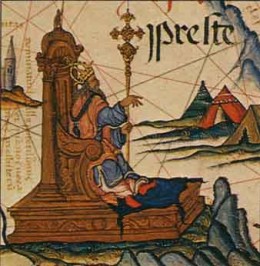 James Kirchick, writing for Foreign Policy, rather accurately describes [1] how Russia is creeping deeper and deeper into fulfilling Alexander Dugin’s vision [2] for her as the world’s savior from American cosmopolitanism . . .

The Center for Strategic Communications, a Kremlin-linked think tank, has bestowed a new title on Russian President Vladimir Putin: It’s calling him “World Conservatism’s New Leader. [3]” Putin, according to the report, is the most influential world figure resisting the global onslaught of multiculturalism, radical feminism, and homosexuality, all foisted upon an unsuspecting world by the “ideological populism of the left.” For years, Putin has been working to reestablish the global influence that Russia once enjoyed. But there was one big problem: his regime has been devoid of the ideological raison d’être provided by communism. Whereas the Soviet Union was once able to muster support from people around the globe as the world headquarters of Marxist-Leninism, Putin’s Russia offered little in the way of comparable ideological appeal (other than to revanchist Russians seeking a vague return to their country’s former glory).

Now the Kremlin seems to have settled upon a new international brand: the protection of “traditional values” from the forces of cosmopolitanism and post-nationalism. Like the Comintern before it, this “Conservative International,” as Radio Free Europe/Radio Liberty commentator Brian Whitmore writes, will serve as the ideological fount of anti-Western agitation.

James Kirchick, a gay Jewish neocon, is naturally alarmed by Putin’s putsch against the West’s aggressive promotion of decadent lifestyles and homosexuality. A series of popular populist laws deliberately designed to escalate this moral conflict with the West has been aided by a parade of Western celebrities and local Soros-operatives seemingly hellbent on confirming their darkest fears. Just as he did in Syria, Putin demonstrated his masterful grasp of politics by nudging American foreign policy operatives to design and then stumble into their own trap.

The thesis of the article is that “we” (the West/Judeo-Masonic Elites/Atlanticists/Amerika) should tactically retreat on the homosexual agenda altogether and re-frame our struggle against Russian sovereignty and culture as a more generic struggle for “freedom” and “democracy.” He concedes that the peasantry there isn’t degenerate enough yet to sign on for gay marriage or encouragement of promiscuity and alternative sexuality in public school curricula.

In other words, Kirchick is scolding the agents of Modernity to lead with the catch-phrases and buzzwords which make it sound appealing, not the unsustainable carnival of excess and exploitation it actually amounts to. He’s scolding them to get back onto the neocon geopolitical script: Blather on about “open societies” while our oligarchs dive into those openings, offer lofty speeches about “liberty” while liberating the innards of illiterate villagers in a scramble for resources, and prattle about “free speech” while tightening the screws of our soft tyranny down to fewer and fewer tolerated topics.

I believe Kirchick’s correct that Putin and his inner circle are merely exploiting the nearest opportunity to return to their cherished role as Cold War nemeses of American imperial aggression. It’s a smart move, and the Traditionalist stick actually works against America in a way the Marxist stick never could. In the perennial geopolitical chess game, the Traditionalist vision not only holds more promise than Marxism or naked Soviet revanchism, it holds more promise than America’s discredited Enlightenment canards. It’s the ideal vehicle for Soviet revanchism, a fact Dugin’s been trying to explain to his countrymen for well over a decade, and a fact that’s only beginning to dawn on neocon think tank types.

This is the single most important geopolitical event for American White Nationalists since World War II. Without powerful global oligarchies to project and protect them, ideas are impotent. Being correct isn’t good enough, and it never has been. For several decades, our identitarian struggle was deprived of oxygen as the world oscillated between Global Capitalism and Global Communism, both of which are antithetical to our survival. Now, with the world beginning to oscillate between Global Capitalism and Global Traditionalism, ideas like “sovereignty,” “identity,” and “heritage” will bubble back into popular discourse.

We can’t expect Russia to actually actively back us in the way America’s backing the Free Syrian Army, at least not yet. But it’s impossible for them to pursue their geopolitical agenda without accidentally helping us by relentlessly critiquing the multicultural, globalist, and capitalist agenda of our common enemy. Traditional ethnic self-determination will be a powerful weapon in their arsenal as they wage the Cold War for influence over disputed countries and regions the world over.

Our job will be to develop and refine our own culture of critique, one where we borrow the abstractions being pitched from Russia and her allies and repackage them for our purposes. Their journalism, entertainment, and academia are already leaving a seismic impact on American White Nationalists, with much of the original research and policy positions undergirding our positions originating from agents of Russian influence. Snowden, Assange, the Syrian War, the gay thing, and much more has been either orchestrated or assisted by the Kremlin. The Next Cold War

And the Kremlin’s just getting started.

We’ve got to be mindful that we don’t become useful idiots, anti-American lackeys of the Russian agenda parroting their talking points without remembering to tie them back to our own struggle. The Russian government is a shrewd and calculating oligarchy, and its citizenry is nearly as decadent and materialist as our own. There’s a lot to admire in Vladimir Putin and in some changes happening in Russia, but Putin is no Prester John, and many of the Russian nationalists pushing this agenda are bigoted and myopic equivalents of our own neocon chicken hawks.

Just as we inappropriately framed all Russians as sinister Marxist villains during the first Cold War, Russians often inappropriately frame all Americans as greedy and decadent globalist villains. There’s certainly some truth to this stereotype, but it’s not the whole truth. Marxism wasn’t broken in Russia by America’s military might or the West’s wealth; it was broken by the death of the Marxist Dream in the hearts of the Russian folk. Russia can and will continue playing the game with pipelines and puppet regimes, but truly breaking the back of the American threat to Russian sovereignty and identity requires the death of the American Dream in the hearts of the Anglo-American and Western European (Atlantic) folk.

We on the North American New Right are working hard to kill the American Dream once and for all, developing and promoting a new identitarian and traditional dream centered around family, folk, and faith. Our enemies are fumbling, our potential allies are warming up to us, and our message is improving. We’re mentoring the new talent that’s steadily trickling in, mining the seemingly fathomless wealth of brilliant ideas which have yet to be translated for and presented to contemporary English-speaking audiences, and building a growing network, node-by-node, of dedicated radicals.

The early 21st Century is shaping up to be an exciting time. While America’s regnant oligarchy is positively guaranteed to burn, we don’t know whether it will do so gradually and imperceptibly or suddenly and catastrophically. We don’t know how it will all play out, but the future won’t merely land in our laps. We have to struggle for survival and sovereignty, and we have to be agile enough to search for and seize opportunities that present themselves. In the coming struggle between Modernity and Tradition, Tradition is destined to prevail. Whether our own people will survive to celebrate that victory remains to be seen.