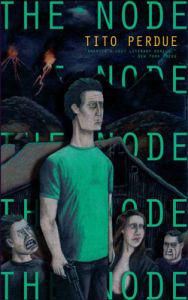 Tito Perdue’s The Node is a futuristic, dystopian satire on our anti-white system with an explicitly White Nationalist and New Rightist message.

Satire is easy – just pick a few trends and extrapolate to absurdity. Any idiot can do that, and quite a few have. Which, of course, means that good satire is very hard to do and hard to find. The Node, however, is satire of the highest order: a richly textured, endlessly imaginative, and unfailingly funny vision of a future we are working to avoid. There are surprises and delights on every page. But, like any important discovery or work of the imagination, what seems surprising at first glance seems inevitable upon reflection.

The world of The Node is our world, around the middle of this century when whites will become a minority, unless we do something to stop it. Political correctness, anti-white discrimination, feminism, and the unchecked immigration and reproduction of non-whites are rampant. Whites as a race are being replaced by prolific non-whites. White men are being socially displaced by white women. Men are infantilized and emasculated. Women are “strong,” which means loud and vulgar, as well as petty and tyrannical.

Society is all about providing equality and inclusion for under-represented, historically marginalized groups, which means: everybody but white men. But instead of creating a utopia of equality and inclusion, society is rigidly hierarchical, with the highest positions awarded to the people with the most defects and the least to offer, people who seethe with neurotic resentment even as they wallow in unearned privileges. White men, being the bottom of the social hierarchy, are subjected to countless indignities by their social superiors.

Fashions are grotesque and undignified, involving forms of body modification and mutilation that cannot be discarded when they go out of style. Expressive individualism reigns, and everyone must conform to its dictates. Pop singers, athletes, and politicians are revered, especially if they are non-white. Sexual promiscuity and perversion are lionized. Literature is crap, but people don’t read anyway. They instead watch televised sports and tendentious propaganda dramas. Music is just insolent noise.

Although the cultural sphere is entirely Leftist, the economic system is hyper-oligarchical and capitalist. Nature has been ravaged by pollution: the weather is colder; sunlight is lethal; countless species are extinct. The US has an essentially Third World economy, spewing out cheap plastic junk for vulgar morons. The dollar is worthless, and the currency of choice is the Chinese yuan. The endless, sprawling cities are filthy, impoverished, racially and ethnically segmented, crime-ridden, and chaotic. The United States is still bogged down in senseless wars and police actions around the globe. Still, it’s all supposed to be “good for the economy,” as the characters never tire of reminding us.

The Node is unique among Perdue’s seven published novels because it is not part of the metanarrative of Lee Pefley, the author’s semi-autobiographical alter ego. Instead, the nameless 44-year-old protagonist of The Node is simply referred to as “our boy” or “the novice.” One day, he wanders off his Tennessee farm after a few years of seclusion—during which things have gotten dramatically worse—and ends up in the city. There he happens upon a “node”: a fortified enclave of racially-conscious “cauks” (Caucasians) who have banded together for mutual aid and defense and something more.

Nodes, of course, are parts of networks, and the ultimate aim of the network is to “turn the world around,” i.e., to establish a white homeland in North America, where our race can perpetuate itself and white civilization can be preserved and perhaps even revivified. As the term “novice” hints, the Nodes are organized as a hierarchical, initiatic, quasi-religious order. The Nodes were created by a very different St. Benedict, “the Master,” Larry Schneider, for very different ends. The Nodes thus combine the culturally preservationist function of the rustic Academy of Morning Crafts [3] with specifically political, even revolutionary aims.

Schneider’s emphasis on high culture and genetic and cultural diversity have an unmistakably “New Right” air. He foresees “a globe of a hundred thousand societies, each following a trajectory of its own, and each becoming more and more unique as time goes on. Diversity I call it” (p. 241). Schneider does not, however, envision peaceful coexistence with the current system, but he thinks that peace is overrated and that the best moral qualities of a people are stirred by war or its moral equivalent.

Education and high culture should be the preserves of the intellectual and creative elites, not dumbed down for the masses, who are more interested in material than spiritual existence. As in Morning Crafts and his other books, Perdue believes that the good for all men rests on the foundation of Hobbit-like material comfort, emphasizing wholesomeness, simplicity, and craftsmanship. Some build lives of the mind upon these foundations, but most do not. Since the cultured can appreciate the simple life, but simple people cannot appreciate higher culture, political power should be concentrated in the hands of the cultured and wise for the good of all.

The portrayal of the Nodists is a wry satire on White Nationalists and racially-aware conservatives. At 44, “our boy” is a young whipper-snapper. Most of the other Nodists are old men who combine awareness of the most important matter of all – the threat to our race and what is necessary to preserve it – with various forms of antiquarianism and crankery. There are few women, even fewer nubile and attractive ones, which is a constant source of friction among the men, who naturally think and talk about reproducing with them, but never get around to it. Naturally, the Nodists are a product of the society they wish to destroy, often displaying shocking degrees of indoctrination and bad taste, not to mention alcoholism, loutishness, and unreliability, which much be compassionately indulged to attain their aims – and suppressed if they interfere.

The plot of the novel is rather simple: after a period of education at the Node, our boy leads a number of Nodists into the wilderness to establish a new Node, his travels providing us with a guided tour of dystopia and a few lessons in leadership and community building. As in Morning Crafts, Perdue quite casually indicates that a certain amount of ruthlessness and force may be necessary and therefore justified to save our race. If that end does not justify the means, what else could?

The science-fiction elements of The Node are handled in a particularly droll way. A device called the “escrubilator” is casually mentioned on practically every page, but it is never really defined or described. It seems to be a weapon as well as a telephone; they are machines, but they also seem to have minds of their own. They go through as many real and specious permutations and upgrades as cell phones, until the whole technology is recalled and, well, scrubbed.

I highly recommend The Node. At 258 pages, it is a quick, highly-entertaining read. Perdue’s wry humor had me smiling at every page, with an average of one audible laugh every seven pages: all told, an excellent return on my $12. Tito Perdue is our finest living novelist, proof positive that the tradition of visionary Right-wing fiction [4] that includes D. H. Lawrence, Knut Hamsun, and Wyndham Lewis lives on. The Node, like all good satire, is a deeply life-affirming piece of literature, for if we can laugh at evil, we have already defeated it, in our own minds at least.