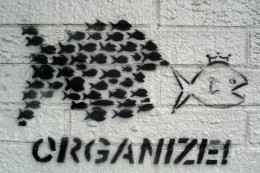 William Pierce’s article “Skinheads and the Law [5]” is a useful point of departure for discussing an important problem with the White Nationalist movement, a problem that I call premature populism.

White Nationalism, as I define it, is a form of populism [6] in the following sense: no system of government is legitimate unless it promotes the common good of a people. A system is illegitimate if it promotes the interests of one class or faction, or even aliens, at the expense of other parts of the body politic. But, as a populist, I believe that the interests of the whole are best served by an elitist political system, as long as the elite remains accountable to the rest of society. The problem of politics always boils down to how one can find leaders who are better than the common man. Furthermore, I believe that any movement that aims at creating a populist White Nationalist system needs to be as elitist as possible. Finally, I believe that to create such a movement, we need to focus first on creating the leadership caste before we reach out to the masses.

I also believe that White Nationalism needs to be populist in the more common sense of the word, for in terms of present day society, the white social elites are disproportionately responsible for our decline and the white masses are disproportionately victims. Thus to gain power, White Nationalists should not merely represent the interests of all whites, but we should also be willing address the genuine and just resentments [7] of the masses against the existing elites, who will not be allowed to keep the wealth and power they have accumulated by dismantling white America. Although my tastes in music and art are generally elitist, and my SWPL quotient [8] is a matter of public record, all of my political sympathies lie with the middle and working classes, who have suffered the most from white dispossession. But you won’t catch me dead at a Taco Bell.

There is, of course, a correlation between income and IQ as well as certain virtues and tastes. But given the perilous state of white societies world wide, we can say with confidence that these are not the kinds of intelligence and traits of character that White Nationalists should particularly prize. The excellences of bourgeois man have brought our race to the edge of oblivion. Our salvation will come only by recovering the virtues of the sages, warriors, and bards of our pre-modern ancestors. And those traits can be found in all segments of existing society.

Thus premature populism does not mean recruiting a new elite from the best of our people, regardless of contemporary social distinctions.

Premature populism means recruiting people who are merely average or below average in intelligence, virtue, and taste before we have constituted ourselves as an elite with the authority and ability to lead them. Mobilizing the masses can also be premature if the historical situation makes it impossible to make real political headway.

By focusing on Pierce’s essay on skinheads, I do not wish to give the impression that my criticisms are confined to Pierce or to skinheads, since the problem I am describing is much wider. Furthermore, I am not criticizing either Pierce or skinheads across the board. I have discussed my views of Pierce, both positive and negative, elsewhere [9] on this site, and have I reprinted [10] many of his articles. I also hasten to add that some of the finest people I have known have come out of the skinhead movement, in confirmation of my conviction that people of quality can be found in all segments of the existing society.

William Pierce was by conviction an elitist [11]. But he was an elitist in a hurry. Thus he was tempted again and again by what he called, in his less hurried moments of reflection, the “buffoonery [12]” of populism. In his 1995 essay on skinheads, Pierce shows a realistic understanding of the problems of the skinhead subculture. But when he weighs the question of whether it would be better to direct scarce time and money to influencing college students or skinheads, Pierce, a Ph.D. in physics and a former college professor, shows a marked preference for skinheads. Pierce allows that college students are more likely to have greater power and influence within the current system. But Pierce was more impressed by the fact that skinheads are more racially-aware, macho, and aggressive than your average college boy. (It is hard to say how many skinheads there are in the world, but it may well be that there are more tough, athletic college boys than there are skinheads, even though genuinely tough men might be a minority among college boys.)

The decline of the National Alliance is a textbook example of premature populism. Pierce’s basic error was trying to imagine a viable White Nationalist political movement in the present society. If  one asks who today is likely to go out and actually fight for a white society, the answer is obviously not people from upper and middle income brackets. The people who have the racial awareness, toughness, and meanness to fight for a white society are predominantly from the working and sub-working classes. These are the people who have been hardest hit by white dispossession. These are the people who have the least to lose and the most to gain from attempting a white revolution. But the problem is that, in the present circumstances, White Nationalists are not in the position to credibly organize and lead these people, and even if we were, we are in no position to destroy the current system.

Premature populism is bad because:

2. It encourages good, sound, salt-of-the-earth people to waste their time, money, and efforts in premature political activism when they could and should be pursuing families and careers.

3. It encourages tolerance of sleazy, skanky, crazy people, who destroy everything they touch and prevent us from attracting superior people (including the better sort of high-functioning eccentrics). If we really believe in our message, then we have to believe that it will appeal to sane and normal people. Thus we have to stop coddling every stray dog of humanity who shows up at our door because we are just so desperate to hear from new people who seem to understand. We have to stop counting the crazies in front of us and think instead of the legions of superior people they are keeping away.

4. It encourages what I call jock-sniffing [14]: the fetishization of guns, muscles, and machismo–including one of the greatest self-inflicted plagues on our race, alcoholism–at a stage of history when our movement needs to focus more on building up brain-power, technological competence, communication skills (especially writing and speaking skills), media savvy, organizational competence, and good taste, particularly in matters of design and advertising.

The net result of premature populism, kook-coddling, and jock-sniffing, is failure, burnout, and bitterness for all involved.

But what’s the hurry? Yes, I know that our population is aging and shrinking. I know that non-whites are demographically swamping us. But in 20, 30, or 40 years–after the lifetimes of many of the people reading this–there will still be hundreds of millions of white people, including millions of tough, angry, macho white men. Indeed, there will be more of them, because although our population in absolute and relative numbers will be smaller and older, white dispossession will have worked its way up to the higher income brackets. The system is manufacturing armies of tough, angry, dispossessed white people for us. They’re not going away any time soon.

So we have time to focus on other things. It is too early for politics, so let’s take the time to lay solid metapolitical foundations for successful politics when the conditions are right. Metapolitics boils down to two things: propagating ideas and building community.

The basic metapolitical questions are: Who are we? Who are our enemies? What is right? What is possible? We need to answer these questions for ourselves and our people if we are going to lead them successfully. And we need to hone our message and the skills and media necessary to propagate it to all white groups.

There is no need for premature populism. The people will still be there when we are worthy of leading them and political action can actually make a difference. Thus White Nationalists have the time to get things right. And if there is no time to get it right, then one more repetition of a failed strategy will not save us anyway.