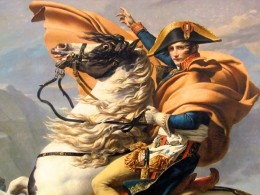 The Republican Party is useless as a political force. The key battle was not the presidential election of 2012 but the passage of Barack Obama’s health care plan. All of the disparate factions of the American Right joined together to oppose “Obamacare,” and they failed, miserably. Instead of Obama’s Waterloo, as then Senator Jim Demint promised, it was his Austerlitz.

Obama is now cruising into his second term with a Democratic Senate and a compliant media at his back. Meanwhile, the Republican Party is leaderless and rudderless, Jim Demint quit the Senate [2] so he can make money [3] scamming [4] old people for Conservatism Inc., and the Indian-American Republican governor of South Carolina appointed an unqualified black guy [5] so the media won’t call the GOP racist. The next day, a leading political website reported that the Republican Party’s main problem is that it is racist. [6]

If it was not already clear, it should be clear now – there is no longer anything realistic about believing the conservative movement can achieve any of its stated goals. Conservatives frustrated with racial double standards on affirmative action, official multiculturalism, mass immigration, and political correctness are already used to contemptuous treatment by the Republican Party and “the movement.” However, even kosher conservatives worried about limited government, tax cuts, or deficit spending have nothing to look forward to. John Boehner has kept from sobbing and tanning long enough to cave on discussions for the “fiscal cliff,” and nonwhites favor greater government spending by even larger margins [7] than they support immigration liberalization.

The brilliant Republican “consultants” who spearheaded the fearless and inspiring campaigns of John McCain in 2008 and Mitt Romney in 2012 are already hastening to sound retreat on guns [8], perhaps the one issue where the conservative movement has actually accomplished some good. What we are witnessing is the wholesale surrender of the conservative movement. The model to follow is therefore David Cameron’s conservatives, which changed their logo from a torch to a cartoon tree [9], is furiously attacking to the right, and is even supporting “anti-fascists.”  [10]

None of this should be surprising – conservatism has never won [11], conservatives don’t want to win [12], and arguably the movement has been specifically designed in order to lose [13]. In response, secession is once again mentioned in the political conservation, especially in Texas and the states of the Old Confederacy. While this is nothing really new (remember all the talk about seceding from “Jesusland” [14] after Bush 2004?), what is new is the celebration of Barack Obama as symbolic of a new, non-white, and most importantly, explicitly anti-white America. Just like Hollywood, the political class is ripping off the mask and is increasingly comfortable with overt pronouncements that white people should be dispossessed, disarmed, and destroyed. We only have to look to South Africa to see what a “modern, democratic” nation can do once the demographics have shifted.

Whatever the triumphalism of the liberal scribblers, this isn’t some “new America.” It’s not America at all. It’s not even a country. It’s just some Third World freak show that rolls on and on, careening wildly from one disaster and humiliation to another.

If pussyfooting around with conservatism is no longer an option, even theoretically, secession becomes the last quasi-legal hope for those opposed to unlimited liberal control. Secession cannot be simply the cry of a party out of power, or a frustrated grassroots, or a sign of cultural alienation. It’s the only way out, and it’s more realistic than donating to Rand Paul, vainly hoping that someday he’ll cut foreign aid.

That said, secession can’t just be the only way possible to achieve conservative policy goals. It is, of course, but that isn’t the point [15]. The goal should not be to simply create some corporate utopia where workers can be casually exploited and disregarded. Not only would such a state be nightmarish, but the lust for cheap labor would promote mass immigration, and the pattern would simply repeat itself.

It also can’t just be independence in name. A new state carved out of the federal Leviathan can’t just be another colony of the banks with a pointless flag. Though the financiers are powerful, their control is not infinite. Iceland [16] shows that a state can defy the Masters of the Universe and prosper without being crushed by some mysterious legion sent by the House of Rothschild [17].

The reason for secession is that we as a people need some kind of mechanism to propel forward positive societal change, financially, culturally, and demographically. This requires state power. Let us have no illusions about “individual freedom,” or “limited government,” or “constitutionalism.” Every negative individual choice made in this country, from the children ripped away from a father, to the white workers thrown out of a job, to the women murdered on the street in yet another “random” attack, is partially the product of an entire system pushing its desired outcomes. A healthy, moral life becomes more difficult every day and will eventually become impossible [18], and the people making it so know exactly what they are doing.

To reverse this requires force [19]. Let us be clear – we want a state in order to use force to create a superior way of life for our people and protect them from their enemies.

What a white ethnostate can do is transcend Left and Right and reconcile the better elements of our warring parties into an actually functional society. Whatever else one may say about them, one of the most thrilling aspects about the novels of Harold Covington [20] is its portrayal of the mundane details of a white ethnostate. An armed populace and disarmed police, efficient and environmentally friendly mass transportation, healthy food rather than mass produced garbage, intact families living happily in mortgage free houses, and quality goods produced by hard workers paid high wages are the kinds of goals that we can all understand and that are worth fighting for. Even the cultural changes he describes, from revitalized heathen and Christian religious movements, to the return of courtly dating, to fashion that promotes dignity rather than degradation – are only possible if whites are able to carve out a space for themselves.

What Paul Kersey has termed Black Run America is not capable of making the trains run on time [21] or preventing Negroes from attacking people or even throwing their own feces [22]. It certainly can’t do anything about mending the social fabric. Progress towards an even tolerable society requires ripping this monstrosity out of the muck, and placing it, by force, on a different track.

State power allows whites to recapture the sense of building a society, “progressivism” in its best sense. It allows us to create a feedback loop of positive action constantly generating further advances. Today, we are stuck defending the rotting inheritance of our forebears, grimly waging a slow retreat and consoling ourselves we’re making them pay for every step. To break out of that system requires breaking this system.

None of this can happen without a state. All other tendencies and activity – metapolitics, cultural societies, spiritual movements, writing, teaching, politics – are means to the end of a truly sovereign white ethnostate. I am a rebel and an anarchist in this society, because it is beyond reform, and attempting to save it from itself is sick and immoral. I am a pillar of the community in the White Republic of the future.

All societies have hierarchy and compulsion. The only question is what kind of compulsion do we want. With intelligence – and compassion – we can build a society that fits with the best elements of human nature so the hand of government is lightly felt. A sovereign state doesn’t mean an intrusive one. Given minimal support or even benevolent neglect, whites will build good societies. Even with all the forces of the tyrant aligned against them, whites are still doing the best they can, carving out a piece of heaven here and there [23] amidst the malevolent carnival that used to be their country.

However, recognizing this doesn’t mean all white advocates have to do is throw off the yoke and then do nothing. We must set a deliberate direction for culture and society through specific government policies.

If you want strong families, you have to reform family and marriage law and create economic policies that reward good choices. If you want quality education, you have to put through policies that recognize that not everyone should be going to college and that real skills and real curriculum should be taught both at a trade school and at a liberal arts university. If you want responsible financial management by families as well as by government, you need policies that reward saving rather than constant consumption. If you want a white ethnostate to stay white, you can’t just bar nonwhite immigrants and yell racial slogans – you have to create a system that prioritizes quality products over plastic junk and skilled labor over dull-eyed helots.

All this can only come from the top. All of this requires force and state power.

Secessionists and white nationalists have to get real and get together. It’s not about petitions, protest, or proscribing certain actions of the government. It’s not about returning to a Constitution that either is working as intended (and therefore sucks) or failed (and is therefore useless). It’s about acquiring power and using it for meaningful, beneficial ends. We will use state power to make a better life for our people at the ground level and promote the upward development of the race. All the rest is a distraction.