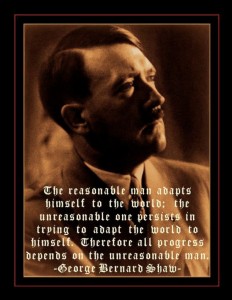 In the 1920s and ’30s, Robinson Jeffers was one of America’s most esteemed and critically acclaimed poets. However, in 1948, his public and critical reputation entered a steep and irreversible decline upon the publication of The Double Axe and Other Poems [3]

(New York: Random House, 1948), which contains a number of poems about the Second World War and its aftermath that were strongly critical of the Allies and clearly sympathetic to the defeated Axis powers. Jeffers’ publisher Random House insisted that ten poems be dropped from the collection and even published a political disclaimer in the front of the book.

“Tragedy Has Obligations” is one of the suppressed poems, and it is easy to see why. Written in June of 1943, it is addressed to Adolf Hitler, who is portrayed as a tragic hero who “meant well and made woe,” and whose mistakes — failing to press his advantage against England, then invading Russia — had set his inevitable fall in motion. Jeffers predicts Hitler’s suicide and recommends that he die with dignity and do his best to take his enemies down with him.

I highly recommend The Double Axe, but be sure to get the edition that includes the suppressed poems. Jeffers is a great poet, regardless of his subject matter, but when he grapples with the greatest tragedy of our time, the full measure of his genius is displayed. These poems, moreover, are not “merely political,” for Jeffers’ politics is part of his larger philosophy of “inhumanism,” i.e., his rejection of anthropocentrism in favor of a life- and cosmos-centered outlook, which provides a foundation for his politics as well as a “deep ecology” — a viewpoint that closely parallels another book written in the bitter aftermath of the Second World War: Savitri Devi’s Impeachment of Man [4].

If you had thrown a little more boldly in the flood of fortune
You’d have had England; or in the slackening
Less boldly, you’d not have sunk your right hand in Russia: these
Are the two ghosts; they stand by the bed
And make a man tear his flesh. The rest is fatal; each day
A new disaster, and at last Vae Victis,
It means Weh den Gesiegten. This is the essence of tragedy,
To have meant well and made woe, and watch Fate,
All stone, approach.

But tragedy has obligations. A choice
Comes to each man when his days darken:
To be tragic or to be pitiful. You must do nothing pitiful.
Suicide, which no doubt you contemplate,
Is not enough, suicide is for bankrupt shopkeepers.
You should be Samson, blind Samson, crushing
Al his foes, that’s Europe, America, half Asia, in his fall.
But you are not able; and the tale is Hebrew.

I have seen a wing-broken hawk, standing in her own dirt,
Helpless, a caged captive, with cold
Indomitable eyes of disdain, meet death. There was nothing pitiful,
No degradation, but eternal defiance.
Or a sheepfold harrier, a grim, grey wolf, hunted all day,
Wounded, struck down at the turn of twilight,
How grandly he dies. The pack whines in a ring and not closes,
The head lifts, the great fangs grin, the hunters
Admire their victim. That is how you should end — for the prophesied
You would die like a dog — like a wolf, war-loser.