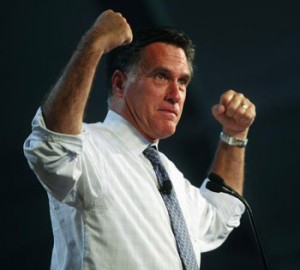 Romney wins Round I

Last night’s debate went very well for the Romney campaign. Obama’s well-earned reputation for being smug and professorial was on full display. Enjoying a relatively comfortable lead in the electoral college projections, he made a tactical decision to shrink from risk at every turn. He had several open shots he could have taken at Romney, shots he surely recognized and made a conscious decision to pass up. He made a tactical decision to keep things mellow, too mellow for a fiery campaign-defining game-changing exchange.

In a larger sense, Obama achieved the minimum he set out to do. Romney won the debate itself by every metric (except perhaps a wonkish and irrelevant fact-checking one), but he didn’t pull off a truly game-changing moment. While Romney’s InTrade odds [1] did spike in the wake of the debate, they haven’t spiked to anywhere near 50%. Given Obama’s lead, his first imperative was keeping the debate small. He managed to do so, forfeiting a little debate to a struggling challenger whose little victory is likely too little and too late.

In the immediate context, Obama’s debate performance was a failure. He attempted to replicate the strategy Romney deployed so effectively in the primary debates: aloof alpha posturing. When it works, as it did for Romney against Santorum and others, you look like an adult among children. When it doesn’t, you look like a poseur. Obama’s body language reminded me somewhat of Romney’s body language during Ron Paul’s tirades. While my sentiments were firmly with Dr. Paul, I knew that amused smile on Mitt’s face was defeating him more effectively than any counter-argument possibly could . . . not that he had coherent counter-arguments. Last night, Obama’s half-amused dismissiveness was dissonant with his tall and handsome challenger’s passionate and polished performance.

While Mitt Romney spent the majority of the prolonged primary debate fiasco with a fatherly grin chiseled on his wooden countenance, he did go on the offensive a handful of times. When Rick Perry tried to corner him on his employment of illegal immigrants, he dominated and scolded him with a startling show of physical intimidation [2]. While he didn’t happen to be within reach of Newt when he tried to call Romney out, Romney was every bit as cruel, direct, and devastating. Romney’s been lying and flip-flopping his ass off for years, but there’s seemingly a biblical curse that strikes the tongue of anybody who attempts to directly challenge him on it. Romney goes on the offensive when cornered, and Obama’s not going to open himself up to that unless he has to. Obama: A talker, not a fighter

For all Obama’s vaunted Blackness, his manner and disposition is that of a pampered, sarcastic, non-confrontational hipster. Romney, on the other hand, is a bonafide bully [3]. He genuinely enjoys hurting weaker people and seizes every pretext which allows him to do so.  He’s been a bully since his prep school days, and it’s the secret ingredient behind his meteoric success in the financial consulting profession. He loves the jolt of power that comes with firing people so much that he made a point to inform the PBS moderator that his organization would be defunded like one of Bain Capital’s underperforming investments [4] . . . essentially gloating about his plan to fire him when he gets the chance.

The Democratic pundits and wonks are howling at Obama today for shrinking from the confrontation. Obama did the smart thing, as it’s highly unlikely that he would have the nerve to win against a more aggressive exchange. He would run a very real risk of being humiliated in the same way Rick Perry and Newt Gingrich were humiliated. The most likely outcome is for Obama to act like he always acts when cornered or challenged . . . pissy and prissy. The startlingly large number of voters whose decision will come down to their visceral impression of the candidates in the debates will have a choice between a bold statesman and a butthurt wimp.

The next presidential debate will be about a blend of domestic and foreign policy issues, then the final one will be exclusively about foreign policy issues [Note: Immigration has apparently ceased to be a major issue.] Obama’s best bet is to stick with his initial strategy of avoiding a genuine debate and confrontation at all costs. The subject matter will become more amenable for Obama, as Romney’s foreign policy views are a startling mashup of LDS-inspired American Exceptionalist bravado, Likudnik Israel First brinksmanship, and Cold War reenactment.

Not that I care one way or another.

Since every single candidate (including, regretfully, Merlin Miller [01:17:15] [5]) has explicitly denounced my right to preserve my heritage and identity, I will (for the first time in my adult life) not be casting a vote in the upcoming election. I’m tired of making a fool of myself. Birchers are losers. Why not emulate the Golden Dawn?

While I couldn’t or wouldn’t vote for Barack Obama, I would rather be up against a straightforward enemy than a traitor. Furthermore, I would rather be up against a straightforward traitor like Mitt Romney than a conniving traitor who has siphoned untold thousands of dollars and hours of time from White Advocates. After waiting for our checks to clear, Merlin Miller has declared that not only is he outright opposed to us . . . but that he’s on a veritable anti-racist moral mission of some sort to hijack one of our organizations and redirect it away from its chartered purpose of defending our right to exist.