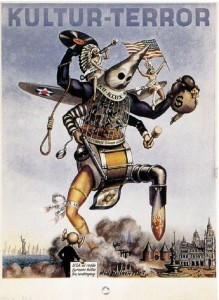 Alexander Dugin is a popular, well-connected, and academically respected professor at Moscow State University. Unlike his North American and Western European counterparts, his ideas are not censored by Russia’s mainstream media, and he more or less enjoys the favor of Putin’s Russian government. While he’s indubitably the most prominent New Right thinker in Russia, his domestic influence and his ambitious efforts to build international partnerships and relationships have made him arguably the most prominent New Right thinker in the world.

His recently written and translated book, The Fourth Political Theory [2] is a critical milestone in the global development of a New Right school of thought. In it, he strives to speak to a truly global audience, though his parochial biases and perspectives are a regular distraction from that goal. He strives to speak above and beyond modern liberal paradigms and values, but there’s a fair share of self-censorship, cleverness, and . . . Realpolitik . . . to wade through.

Fortunately, those who are intelligent and thoughtful enough to gain anything from this book will be intelligent and thoughtful enough to look past those distractions and at his invaluable insights, strategies, and perspectives. After all, the whole point of Benoist’s pluriversalism (universal pluralism) which he endorses is that the different regions and communities can retain and preserve their own unique narratives and perspectives. In the Russian psyche, “America” is something quite alien to what we Americans experience . . . just as our imaginary “Russia” is surely alien to actual Russians.

Foreigners, especially Russians, almost exclusively see our bad side. In many ways, Russians think more about America’s military and foreign policy than we do. Their exposure to “our” culture is almost exclusively from a handful of Jewish and cosmopolitan hubs which are nearly as alien and hostile to ordinary Americans as they are to Russians. When they visit, they’re more likely to visit those hubs. Just as 20th-century Americans perceived Russia as a villainous caricature of Jewish Bolshevism and belligerent Marxism, contemporary Russians perceive America as a villainous caricature of Jewish liberalism and cannibal capitalism.

In one especially irritating example among many, he explains how American liberal Ayn Rand’s capitalist ideology of Objectivism is the Protestant work ethic taken to its logical extreme. For the record, Ayn Rand was born and raised in Russia, only traveling to America after completing her studies in the very post-secondary university system Dugin works for. The conflation of Rand’s Hegelian inversion of Marxist ideology with Protestant perspectives on predestination could only occur in the fevered imagination of a Russian anti-American polemicist.

Of course, we on the North American New Right  are so gauche as to note that she’s actually neither Russian nor American, but a Jewess (actual surname: Rosenbaum), with a secular Jewish identity, attitude, and spirit. If we were to define a clear distinction between a host nation and Jewish culture, we would find that our actual differences are but a filioque relative to the chasm between either of our nations and the Jewish nation.

Dugin’s political theory “rejects all forms and varieties of racism” as one of its “essential features.” This may be a translation issue, but he seems to define “racism” as supremacism, carrying on about the evils of class racism, progressive racism, economic racism, technological racism (Mac vs. PC?), and cultural racism. Fortunately, he declares that his political theory has a “positive attitude toward the ethnos,” which is perhaps a loophole through which biological definitions of ethnic identities could be smuggled. [3]It’s very easy to denounce racial “supremacism” when both you and your society have had the privilege of being removed from racial strife. Historical examples of “supremacism” were not instances of simple villainy, but emergent reactions to powerful historical forces. Continental Europeans and Russians have plenty of advice to offer and judgment to pass on White South Africans, Australians, and American Southerners who didn’t have the luxury of developing racial attitudes at the comfortable distance afforded to a tenured professor deep in the heart of a largely White country.

Even within America, you’ve had (and continue to have) the aloof Yankees lecturing the South on the immorality of their structured relationship with the Black American people. The Great Migration of Black Americans into the North over the past century has afforded Yankees an opportunity to put their egalitarian theories into practice. Instead of a structured relationship, America’s Northerners opted for no relationship at all. While Southerners merely insisted on “separate but equal” schools, Northerners have avoided, evaded, and neglected their way to a definitively “separate but equal” country.

As the saying goes:

Southerners don’t mind Blacks living nearby . . . as long as they don’t get uppity.

Northerners don’t mind Blacks getting uppity . . . as long as they don’t live nearby.

If Russians are as alarmed by our supposed mistreatment of Black Americans, Amerindians, and other minority groups as they purport to be, perhaps they would consider offering them asylum? Perhaps the disproportionate share of Blacks we’ve imprisoned are political prisoners, political prisoners who will thrive in a less “supremacist” society? I kid. I kid. The Russians aren’t suicidal enough to invite that problem into their country and wouldn’t handle the problem any better than we have. Finally, Black Americans would not accept such an offer. Statistically speaking, Blacks may not be as intelligent as Whites . . . but they’re not stupid. They’re not about to pass up the rather comfortable and privileged position they enjoy in America’s “supremacist” society.

But there’s little point in seriously engaging the racial perspectives of Dugin and other New Right intellectuals abroad, because it’s a subject they clearly don’t take seriously yet. The European and Russian New Right will likely avoid taking racial issues as seriously as the North American New Right does until the sweeping demographic changes present them with serious racial issues. While we in America have a tremendous amount to learn from our brothers abroad, our current status as the primary host of Jewish Power and our intimate historical and direct familiarity with the racial question requires that we approach those problems clearly and directly, without word games, obfuscations, and evasions. I’ve been and will continue to be very critical of not only America’s subverted and psychotic regime, but of the degenerate aspects of our culture which cannot be blamed on Jews and multinational corporations. A good share of the problem is surely our fault. As we move forward, this problem of anti-Americanism is one we’ll need to parse thoughtfully and carefully. Much of the antipathy coming at us from our European and Russian counterparts is valid, understandable, or easy to brush off. There is, however, a good share of it which amounts to mere abuse, distorted demagoguery which plays well to domestic audiences at the expense of developing the very partnerships and relationships of which Dugin obviously grasps the importance.