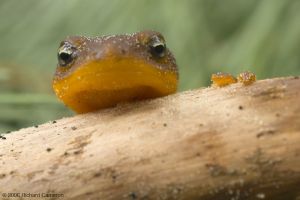 Newt Gingrich’s surprise upset in the South Carolina Republican primary threatens to interfere with the party establishment’s coronation of Mitt Romney. His victory was not a squeaker like Santorum kinda-sorta pulled off in Iowa. Newt trounced Romney by just over 10% of the vote, which has taken his campaign off life support and given it some momentum going into the upcoming primaries.

Until now, Newt’s campaign has been an embarrassment due to his irresponsible and tempestuous mismanagement. He enjoyed a brief surge in Iowa despite a virtual absence of grassroots organizing, fundraising, or media management. This was due entirely to his showmanship at the debates, but be was beaten back by a tsunami of negative ads that reminded Iowa voters of his record.

Newts may be cold-blooded, slimy creatures who crawl out from under rocks. But they are also one of very few vertebrates that can regenerate its limbs, eyes, intestines, spinal cord, and even heart. Like the villain in a vintage horror film, HE JUST WON’T DIE. For any mere mortal, his effort to impeach Clinton over the Monica Lewinsky affair, which ushered in the current age of mean-spirited tabloid partisanship, would have been his undoing. The fact that he was actually having an affair while doing that should have been his undoing. His central role in exacerbating the housing bubble while at Freddie Mac should have discredited him in the eyes of ideologues willing to overlook his moral failings.

Yet, the Newt abides. He’s now perched at the top of the polls despite lacking the record to distinguish himself from Obama in any major way, despite his chronic inability to hold together a coherent campaign, and despite his being a bipolar megalomaniac [2] in the grip of a manic episode.

But not too much should be read into Gingrich’s South Carolina victory. Modern political campaigning has become extremely focused, with campaigns relying on media strategies which allow them and their attack dogs to deliver their messages to very specific audiences. When Newt gathered momentum in Iowa, Romney, Santorum, and Paul all trained their lasers on him, burning him to a crisp by informing likely GOP primary voters in the relevant coordinates of his actual voting record.

In South Carolina, Gingrich’s forceful response to media muckrakers understandably captivated the audience and inspired them to vote for him in a show of solidarity against the “liberal media [3].” It occurred too close to the primary, so his opponents didn’t have enough time to charge their lasers.

While it’s probably foolhardy to bet against Newt, given his unlimited capacity for regeneration, this most recent surge is likely to sputter out very rapidly. The lasers are charging as we speak, and they’re now set to Nationwide Mode. For Santorum, it’s moral. For Paul, it’s ideological. For Romney, it’s personal. Ron Paul cares more about Austrian economic theories than about winning votes on his sold-out farewell tour. When Newt tore into Romney’s record of vulture capitalism, he provoked not only Romney’s defense machine, but Ron Paul’s well-funded and more aggressive attack machine. Over the next few weeks, potential primary voters in several states will receive their anti-Newt inoculations.

The media make more money when there’s a dramatic and competitive race, so they’ll push the narrative that Newt’s in a two-man race with Romney for the nomination. That’s not really the case. Newt relied on dog whistling to racial resentments, witty debate performances, and timing to achieve what he achieved in South Carolina. His supporters have no idea who they’re voting for, but he seems like he would do well in a debate against Obama. That’s not really the case, as the context, audience, and opposition will be entirely different if he makes it that far. He won’t make it that far, fortunately, as a shameless huckster can only get so far before his various scams, angles, affairs, and bungled projects catch up to him.

When I speak of “dog whistling,” I’m referring to Newt’s decision to label Obama “the food stamp president” and Detroit as an example of a failed liberal policy. Newt wants to take advantage of bubbling racial resentments by implicitly feeding it while explicitly ignoring or denouncing it. Everybody viscerally knows why Detroit is a post-apocalyptic hellscape . . . and it has nothing to do with “big government.” If generous social welfare policies were the root cause of Michigan’s misery, then why is Finland, another frigid peninsular welfare state, the happiest [5] and best-educated [6] country on the planet? Detroit’s problem [7] is a racial problem. Americans in the Deep South realize this on a subconscious level, but have been indoctrinated against speaking or even thinking about it honestly. Opportunists like Newt use imagery and coded phrases to exploit racial anxiety while explicitly arguing in favor of globalist multiculturalism and supporting anti-White policies. Working class White voters will continue being cuckolded by the GOP in this manner until they wise up and begin thinking, speaking, and acting like serious adults in defense of their valid group interests. Why take a girl to Tiffany’s for a wedding ring when a wink and a knowing smirk will do?

Not that Newt’s much worse on the key issues than the other GOP candidates. He’s not. He does, however, offer a special opportunity to put the full sweep of neocon hypocrisy on full display in the upcoming election. Outside the Fox News echo chamber in which the primaries are taking place, Newt’s tawdry private life will make fools of the evangelicals who are supporting him. His being directly responsible for the cancerous growth of our government and its deficit while in power will make a mockery of the Tea Party costume clowns who are supporting him. His especially spiteful, inconsistent, and hypocritical personality reflects that of the Republican Party’s coalition . . . and it reflects poorly on it.

White Americans who aren’t plugged into the Fox News warmongering propaganda machine are weary of Barack Obama, but they’re not necessarily eager to replace a bad man with a madman.