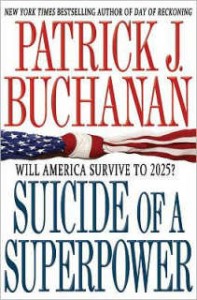 Patrick J. Buchanan
Suicide of a Superpower: Will America Survive to 2025? [2]

As a White Nationalist, my darkest political fear (for the short run, anyway) is that the United States might retain sufficient vestiges of political realism to pull itself together for an Indian Summer of Caesarism before the big cold sets in. Specifically, I fear that someone could put our present Jewish-dominated, multiracial system on firmer economic and political footing. All the instincts of our best conservative thinkers and politicians, like Patrick Buchanan, strain in this direction.

I speak of “Caesarism” because the existing democratic system produces politicians too beholden to special interest groups to serve the common good, thus it has become increasingly necessary to repose important political decisions in the hands of non-elected bodies, such as the commission that oversaw the closing of military bases. The logical extension of this trend is the emergence of a dictatorship, which at least would have a chance of saving America.

But a period of conservative Caesarism would be the worst possible outcome for our race, for no conservative would address Jewish power or the danger of whites being demographically swamped by non-whites who are already here legally. Thus a benevolent conservative dictator just might prolong the system’s life long enough for the forces of anti-white racial degradation and replacement to drive our people past the point of no return.

I agree that we need a time-out from immigration to give White Nationalists some extra time to get our act together. I wish all immigration restrictionists well. But the last thing I want is the present system to stabilize itself, for realistically the system’s collapse is our only hope for the creation of a White Republic—provided, of course, that White Nationalists develop into a viable political movement that can offer a credible alternative once the present system collapses.

Patrick Buchanan’s Suicide of a Superpower argues, with crushing persuasiveness, that the United States is headed toward a collapse. He is so convinced of this that he is even willing to venture an end date in his subtitle, albeit in the form of a question: Will America Survive to 2025? I found this striking, because when I first conceived of Counter-Currents in the Spring of 2010, I found myself thinking in terms of a 15-year make or break period for a North American New Right. At the very least, such a date focuses the mind wonderfully.

In Chapter 11, “The Last Chance,” Buchanan offers a slate of reforms that might actually prolong the life of the republic (if implemented by a dictator). But I see no reason to think that any of his proposals will be implemented given the generally low levels of intellect and courage among American conservatives. But ultimately, that is a good thing for whites.

Chapter 1, “The Passing of a Superpower,” summarizes America’s economic decline particularly vis-à-vis China. This chapter, like the rest of the book, is extremely well-documented. I will be returning to this book again and again for data, and for that reason alone, I recommend it to all white advocates.

Chapter 4, “The End of White America,” chronicles our race’s demographic and cultural decline in America because of low white fertility, high non-white fertility, and torrents of non-white immigration. Chapter 5, “Demographic Winter,” puts the American experience in global perspective. It seems that below replacement fertility is a characteristic of every First World society, including practically every white nation plus Japan, China, Singapore, Korea, and Jews in Israel.

The common denominator in is not modernity, or mere secularism, as Buchanan argues, because the Soviet bloc countries were modernist, materialist, and secularist yet had growing populations. Nor is it a Jewish conspiracy to suppress fertility, which could not explain the trends in Israel and the Far East.

Rather, the problem seems to be a form of modernity that stresses individualism and consumerism. We have created societies in which the people who should be having families instead restrict their fertility to pursue higher education, careers, hobbies, or ecological responsibility, allowing the stupid and ugly people to inherit the earth.

In the white nations, this problem is compounded with Jewish-engineered race replacement policies, primarily non-white immigration. Jews do not have the power to impose these handicaps on Asian nations, and they have no interest in imposing them on themselves.

Chapter 6, “Equality or Freedom?,” is a surprisingly frank and utterly devastating critique of egalitarianism. Chapter 7, “The Diversity Cult” and Chapter 8, “The Triumph of Tribalism” are similarly frank and crushing critiques of the idea that diversity is a strength. Tribalism, not globalism and universalism, are deeply rooted in human nature. Buchanan shows that despite economic globalization, political nationalism has been the dominant trend in the 20th and 21st centuries. Thus, by pursuing diversity, America and other white nations are betting against history and human nature.

Chapter 9, “‘The White Party,’” explains why the Republicans are the de facto party of white America, arguing that the party has no future if it refuses to represent the interests of the white majority. Beyond that, the party must work to preserve the white majority. Again, Buchanan presents a devastating case. But is there one Republican in a thousand with the moral courage necessary to explicitly represent white interests, much less act to preserve a white majority?

Chapter 10, “The Long Retreat,” is a critique of US foreign policy, arguing that the United States needs to downsize its international commitments and expenditures. Currently we maintain more than 1,000 military installations around the world. US troops are present in 148 countries and 11 territories. The United States is committed to intervene on behalf countries around the world, and to maintain our massive budget deficits, we are borrowing from our allies and their enemies alike. Again, Buchanan’s argument is carefully documented and quite compelling.

Yes, religious people are currently more fertile than non-religious people, but religion is not the only factor that encourages fertility. During the baby boom of the Third Reich, Germans did not suddenly become more religious. Nor did Americans during the post-WW II baby boom. The common denominator was high national optimism. And even if people need an Imaginary Friend to tell them to have babies, Christianity is not the only pro-natal religion.

A White Republic should at least try to preserve freedom of religion (or irreligion) and work to create secular incentives for the best people to reproduce early and often. For example, why not encourage bright young women to have families before going to college by offering a free college undergraduate degree to every mother of three children who stays home with them to the age of six?

Buchanan also asserts that America is a Christian nation. This is false on the face of it, as the United States has never had an established church and the inhabitants of America have never been entirely Christian. That did not, of course, prevent Christians from thrusting their religion into the public square anyway. Over the last hundred years, there has been an attempt to push Christianity back out of the public square by atheists, agnostics, liberals, and members of other religious groups, including Jews. Buchanan sees this as a terrible decline. I am not entirely comfortable with the process [3], but overall, I consider it progress toward religious tolerance, which is a worthy ideal.

In Chapter 3, “The Crisis of Catholicism,” Buchanan discusses his own church’s decline from its post-WW II heyday due to Vatican II. He says nothing about how the Catholic Church became so large and influential in America before it committed suicide. He does, however, mention that there were only a few thousand Catholics in America at the time of the Founding. Given the strength of anti-Catholic sentiment in America, the rise of Catholicism was made possible only by the so-called separation of church and state, i.e., the refusal to allow an established church and the embrace of religious toleration, which is a product of the Enlightenment liberals, Freemasons, and deists whom Buchanan despises. It is a heritage worth defending from Muslims—and Christians—who would turn back the clock.

Now, some might be tempted to think that Buchanan is engaged in a cynical bait and switch routine: “Now that I have gotten your attention with the impending doom of the white race, can I interest you in a time-share . . . ?” But Buchanan sincerely believes the package deal of Christianity, the white race, and European civilization. (Let’s hope they hurry up and elect a black pope.) He puts his chapters on Christianity right near the beginning, where the foundations of an argument go. But Buchanan’s in-your-face Christian apologetics are quite unfortunate, for if our race is going to have a future on this continent, it is by uniting on the basis of deep roots of common identity, not by emphasizing highly divisive religious differences.

There are many ways in which it is true that America is committing suicide. But there is also a sense in which America is being murdered. Kevin MacDonald, among others, has chronicled how America is ruled by a hostile Jewish elite that has instituted many of the ideologies and trends decried by Buchanan as suicidal, including multiculturalism and massive non-white immigration. Jews, of course, more than any other people, are aware of the necessary conditions of collective survival. They are concerned to secure these conditions for their own people even as they deny them to us. The obvious conclusion is that they mean for us not to survive as a people. America is being corrupted, exploited, degraded, and murdered by the organized Jewish community.

Buchanan, of course, knows all this. But he has avoided saying so because it is not politic. He wishes to maintain his access to television and publishers. He wishes to maintain his credibility and connections. His friend Sam Francis felt the same way. He wanted to bide his time, preserve and augment his capital, keep his powder dry. But he fantasized about the day when he would finally whip it out, when he would drop the J-bomb. Unfortunately, Sam died with his credibility intact. And you can’t take it with you. You can only spend it while you are here. Patrick Buchanan is now 73 years old, sixteen years older than Sam was when he died. What is he saving himself for? There is so much more he could do for our people.

Suicide of a Superpower is a useful and important book. I recommend it to all White Nationalists. It is not a White Nationalist book, but it gets the reader almost all the way there. If we can’t close the deal with this kind of set-up, we aren’t worth our salt.

Suicide of a Superpower could save America, although it will not be heeded. And when America goes down, people will say that Patrick Buchanan told us so. That will be a nice epitaph for America—and for Buchanan.

But saving America is not the same thing as saving the white race. If our people have a future on this continent, it will only be by freeing ourselves of the wreckage of America and American conservatism. Conservatism is all well and good if one has something worth conserving. Once we have the White Republic, then we can dust off Buchanan’s proposals and put them to work conserving our system, not the enemy’s.