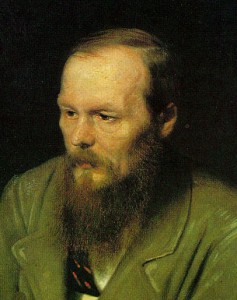 Fyodor Dostoyevsky was born on November 11, 1821. In commemoration of his birthday, we are reprinting the following essay by William Pierce from National Vanguard.

Fyodor Dostoyevsky (1821–1881) was one of Russia’s greatest writers. The son of a physician of modest means, he had the opportunity for an education, and was trained as an engineer. He remained close to the common people of Russia, however, in the experiences of his life and in his writing.

Dostoyevsky was a fervent patriot, but his association with a circle of radical writers led to his arrest at the age of 27. He was subsequently sentenced to death, reprieved at the last minute, and transported to Siberia, where he spent four years in a prison labor camp. This was followed by several years as a private in a Siberian unit in the Russian army.

After his return from Siberia, Dostoyevsky wrote a number of novels, including Crime and Punishment [3]

, however, published in a number of installments in the period 1873–1881 which most explicitly stated his feeling for his people and for Russia.

Dostoyevsky’s Diary dealt with a great many issues of burning interest to his fellow countrymen, showing clearly the insight and sensitivity which made him one of the most beloved of all the great writers Russia has produced. Boris Brasol, who translated Diary of a Writer into English, has described the reaction of the Russian people to Dostoyevsky’s death on February 9th, 1881:

The news of Dostoyevsky’s passing spread instantly, like an electric current, to the remotest parts of Russia, and a wave of mourning swept through the hearts of her saddened people. . . . Enormous crowds attended his funeral: men and women from all walks of life — statesmen of high rank and downtrodden prostitutes; illiterate peasants and distinguished men of letters; army officers and learned scientists; credulous priests and incredulous students — they were all there.

Whom did Russia bury with so great a reverence? Was it only one of her famous men of letters? Indeed not: in that coffin lay a noble and lofty man, a prudent teacher, an inspired prophet whose thoughts, like mountain peaks, were always pointed toward heaven, and who had measured the depths of man’s quivering heart with all its struggles, sins, and tempests; its riddles, pains, and sorrows; its unseen tears and burning passions. . . .

As much as his people loved him, Dostoyevsky in turn loved them — and despised their enemies and exploiters. Foremost among the latter were the Jews of Russia. In Dostoyevsky’s time there were some three million of them, some descended from the Khazars, an Asiatic tribe of southern Russia which had converted to Judaism a millennium earlier, and some who had flocked into Russia from the West during the Middle Ages, when they were forcibly expelled from every country in western and central Europe.

Scorning honest labor, the Jews had fastened themselves on the Russian peasants and craftsmen like an army of leeches. Money-lending, the liquor trade, and White slavery were their preferred means of support — and their means of destroying the Russian people.

So great was the Russians’ hate for their Jewish tormenters that the Russian rulers were obliged to institute special legislation, both protecting the Jews and limiting their depredations against the Russian people. Among the latter was a ban against Jewish settlement in central Russia; they were restricted to the regions of western and southwestern Russia (the “Pale of Settlement”) where they had been most heavily concentrated at the time Catherine the Great had proclaimed the ban, in the 18th century.

This, of course, was regarded by the Jews as “persecution,” and it was their incessant wailing about not being allowed to fasten themselves on the people of central Russia which first moved Dostoyevsky to set his pen to paper on the Jewish question. In the section of his Diary published in March 1877, the writer remarked:

. . . I know that in the whole world there is certainly no other people who would be complaining as much about their lot, incessantly, after each step and word of theirs — about their humiliation, their suffering, their martyrdom. One might think it is not they who are reigning in Europe, who are directing there at least the stock exchanges and, therefore, politics, domestic affairs, the morality of the states.

Dostoyevsky, who had become all too familiar with Jews and their personal attitudes toward their Russian hosts, first as a boy on his parent’s small estate, where he observed the Jew’s dealings with the local peasants, and later in prison, where he noted the aloof behavior of the Jewish prisoners toward Russian prisoners, went on to speculate about what would happen to the Russians if the Jews ever got the whip-hand:

. . . Now, how would it be if in Russia there were not three million Jews, but three million Russians, and there were eighty million Jews — well, into what would they convert the Russians and how would they treat them? Would they permit them to acquire equal rights? Would they permit them to worship freely in their midst? Wouldn’t they convert them into slaves? Worse than that: wouldn’t they skin them altogether? Wouldn’t they slaughter them to the last man, to the point of complete extermination, as they used to do with aliens in ancient times, during their ancient history?

This speculation turned out to be grimly prophetic, for only a little more than four decades later bloodthirsty Jewish commissars, who made up the bulk of the Bolshevik leaders, were supervising the butchering of Russians by the millions.

Dostoyevsky correctly identified the secret of the Jews’ strength — indeed, of their very survival over a period of 40 centuries — as their exclusiveness, their deeply ingrained mental outlook upon the whole non-Jewish world as an alien, inferior, and hostile thing. This outlook led the Jews to always think of themselves as having a special situation or standing. Even when they were trying most ingratiatingly to convince the non-Jews that Jews were just like everyone else, they maintained the inner attitude of a people who constituted a special community within the larger, Gentile community. Dostoyevsky pointed out:

. . . It is possible to outline, at least, certain symptoms of that status in statu — be it only externally. These symptoms are: alienation and estrangement in the matter of religious dogma; the impossibility of fusion; belief that in the world there exists but one national entity, the Jew, while, even though other entities exist, nevertheless, it should be presumed that they are, as it were, nonexistent. ‘Step out of the family of nations and form your own entity, and thou shalt know that henceforth thou art the only one before God; exterminate the rest, or make slaves of them. Have faith in the conquest of the whole world; adhere to the belief that everything will submit to thee. Loathe strictly everything, and do not have intercourse with anyone in thy mode of living. And even when thou shalt lose the land, thy political individuality, even when thou shalt be dispersed all over the face of the earth, amidst all nations — never mind, have faith in everything that has been promised thee, once and forever; believe that all this will come to pass, and meanwhile live, loathe, unite, and exploit — and wait, wait . . .

Is it any wonder that, although virtually every American with a high school education has either read Dostoyevsky’s Crime and Punishment or his The Brothers Karamazov (or both), his Diary of a Writer has been quietly consigned to oblivion by the controlled educational and publishing establishments in this country? The only printing of Diary of a Writer currently listed in Books in Print is one issued by a small, specialty publisher (Octagon Books) for sale to libraries and priced at a prohibitive $47.50. That price tag ought to keep it safely out of the hands of curious American readers!

Those fortunate enough to be able to borrow a copy of the book can read a great many more of Dostoyevsky’s penetrating comments on the behavior of and attitude of the Jews in Russia toward the Russian people during the 19th century. Dostoyevsky especially condemned the exploitation of the poor, ignorant, and helpless Russian peasants by the voraciously greedy and utterly heartless Jews. For example:

Thus, Jewry is thriving precisely there where the people are still ignorant, or not free, or economically backward. It is there that Jewry has a champ libre. And instead of raising, by its influence, the level of education, instead of increasing knowledge, generating economic fitness in the native population — instead of this the Jew, wherever he has settled, has still more humiliated and debauched the people; there humaneness was still more debased and the educational level fell still lower; there inescapable, inhuman misery, and with it despair, spread still more disgustingly. Ask the native population in our border regions: What is propelling the Jew — and has been propelling him for centuries? You will receive a unanimous answer: mercilessness. ‘He has been prompted so many centuries only by pitilessness to us, only by the thirst for our sweat and blood.’

And, in truth, the whole activity of the Jews in these border regions of ours consisted of rendering the native population as much as possible inescapably dependent on them, taking advantage of the local laws. They have always managed to be on friendly terms with those upon whom the people were dependent. Point to any other tribe from among Russian aliens which could rival the Jew by his dreadful influence in this connection! You will find no such tribe. In this respect the Jew preserves all his originality as compared with other Russian aliens, and of course, the reason therefore is that status of statu of his, that spirit of which specifically breathes pitilessness for everything that is not Jew, with disrespect for any people and tribe, for every human creature who is not a Jew . . .

Now, what if somehow, for some reason, our rural commune [i.e., the institutionalized system of Russian peasant society] should disintegrate, that commune which is protecting our poor native peasant against so many ills; what if, straightaway, the Jew and his whole kehillah [i.e., organized Jewry] should fall upon that liberated peasant — so inexperienced, so incapable of resisting temptation, and who up to this time has been guarded precisely by the commune? Why, of course, instantly this would be his end; his entire property, his whole strength, the very next day would come under the power of the Jew, and there would ensue such an era as can be compared not only with the era of serfdom but even with that of the Tartar yoke.