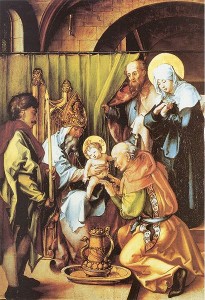 Albrecht Durer, “The Circumcision of Christ”

Female Genital Mutilation describes three basic practices: (1) clitoridectomy (the partial or total removal of the clitoris) and/or the prepuce (clitoral hood); (2) the partial or total removal of the labia minora, which sometimes accompanies clitoridectomy and/or removal of the prepuce; (3) infibulation, meaning the partial sewing up of the vaginal orifice, which can also involve the other procedures. (Such practices as genital piercing and tattooing, although technically forms of genital mutilation, are generally considered a different issue.) Amnesty International, which regards Female Genital Mutilation as an abuse of human rights, estimates that 135 million women world-wide have been subjected to Female Genital Mutilation, and 2 million women and girls undergo it every year. The rationale, if any, behind this religious commandment is debated. Male Genital Mutilation may have been a substitute for the infant sacrifices that were also common among the ancient Semitic peoples. Instead of buying God’s favors with a whole firstborn son from time to time, the Jews decided it was more advantageous to make him work for tips. Male Genital Mutilation may also have been adopted because it reduces sexual pleasure for both males and females.

Islam maintained Male Genital Mutilation, both because it was a pre-existing practice among the Semitic tribes and because Islam maintains both the legalistic nature and many of the laws of Judaism.

The likely reason that Male Genital Mutilation did not catch on in the mother country itself is that she exported most of her religious extremists to the colonies. The reason that Male Genital Mutilation did not become as prominent in Canada is probably Catholic Quebec and the fact that Canada was more Anglican, Tory, and Loyalist than the colonies that became the United States.

The basic pattern of advancing religious practices and values under the guise of science continues today, as circumcision is now alleged to prevent the transmission of HIV.

The arguments against Male and Female Genital Mutilation are essentially the same.

(1) The presumption should always be on the side of maintaining the integrity of the body. Removing or altering a healthy part of the body is mutilation. If it ain’t broke, don’t fix it.

(2) Genital Mutilation is almost always imposed by adults upon infants and children who are not old enough to make such decisions on their own. Individuals should be given a choice about permanent alterations of healthy parts of their bodies. Stained glass depiction of the circumcision of Jesus

(2) Men make most laws, and men love their penises, cut or uncut. Thus there is deep psychological resistance among victims of Male Genital Mutilation to acknowledging that anything important could have been lost. The fact of loss, moreover, makes it psychologically difficult to admit that the loss was for nothing. (This is why disastrous wars often provide arguments for their own continuation, since ending them requires admitting that the losses were in vain.) Protecting women from genital mutilation, on the other hand, appeals to instinctive male gallantry.

(3) American politics and culture are overwhelmingly dominated by Jews and express Jewish sensibilities and agendas. Female Genital Mutilation is primarily practiced by Muslims, who are presently the most active enemies of Jews world-wide. Banning Female Genital Mutilation, which was spearheaded by the Jewish-dominated feminist movement, serves the overall Jewish agenda of heightening tensions between white Americans and Muslims, which is a necessary condition for continued American subservience to Jewish political and military ambitions in the Middle East.

Every time a circumcised man looks at his penis, he should see a sign of Jewish power carved into his own flesh before he was even self-conscious. And the mainstream of the organized Jewish community is committed to ensuring that Male Genital Mutilation is perpetuated for Jews and non-Jews alike.

In light of Jewish cultural and political power, anti-Male Genital Mutilation advocates (“intactivists”) tend to go to great lengths to avoid the charge of “anti-Semitism,” including spotlighting their Jewish allies. According to the Intactivists website [8], “Intactivists’ only issue with Judaism is circumcision. A significant proportion of Intactivists are Jews. Several of its founders and leading lights are Jewish—Edward Wallerstein [9], Ronald Goldman [10], Leonard Glick [11], Mark Reiss [12].”

San Diego-based intactivist Matthew Hess [13] played by these Semitically-correct rules. But he discovered that such self-imposed restraints did not prevent Jews from targeting him. Hess wrote a bill to ban Male Genital Mutilation and sought a state legislator somewhere in the country who would sponsor it. In 2010, Massachusetts State Senator Michael Morrissey championed the bill, but it was killed in committee. (It would be interesting to know who was whispering in the committeemen’s ears.) Hess also authored a measure to ban Male Genital Mutilation in the city of Santa Monica, but it was dropped [14] when Jena Troutman, its principal backer, was charged with anti-Semitism by Jewish advocates. Another Hess-written ban is on the ballot in San Francisco in November of 2011. It too has come under attack from the organized Jewish community. [15]This might throw some light on Hess’ Foreskin Man [16] comic book, specifically issue no. 2, “Monster Mohel,” which has garnered national media coverage and foaming denunciations from leading Jews and their tools for its Der Stürmer-esque aesthetics (as so ably chronicled [17] by our own Andrew Hamilton). Did Hess reason that, since his legislation could just as well be killed softly with a Jewish whisper campaign, it might be more advantageous and instructive to goad his highly-strung and hyper-aggressive opponents into a public temper tantrum? Is Hess calculating that his enemies might empower him through free publicity as they defeat themselves through hubris and hysteria? If so, he is rediscovering the playbook of another publisher of edifying comic-books [18], George Lincoln Rockwell. Whatever the outcome in November, many previously slumbering Californians will learn lessons that will not easily be forgotten. White Nationalists grappling with strategies to challenge Jewish power should pay special attention.