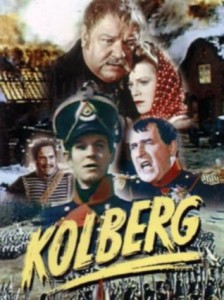 by Veit Harlan was commissioned by Goebbels in 1943, when it could already be foreseen that the war might not be won. The film can be seen as the Third Reich’s Gone with the Wind, an Agfa-color super-production costing millions, with legions of extras and a pointed ideological message. An episode from the Napoleonic Wars was supposed to serve as an historic parallel, with Goebbels instructing Harlan to “show, by the example of the city from which the film takes its title, how a people united in Homeland and Front can overcome every opponent.”

The premiere took place on January 30, 1945, in the besieged Atlantic base of La Rochelle and in Berlin, and soon after was shown in Berlin, Danzig, Breslau, and Königsberg. To the end, Kolberg was one of Goebbels’ most fanatically pursued projects, and his contribution as quasi-filmmaker was considerable. It is as if, in Etzel’s burning hall, one’s last energies were wasted staging a Wagner opera. But in the end it was also Goebbels who mutilated the film, leaving out all-too-drastic war scenes, absurdly wishing to combine escapism and a will to survive. These circumstances lent to the film something crazy, irrational, almost surreal, as if it was an episode from Francis Ford Coppola’s Apocalypse Now.

As the Second World War moved into its most dreadful phase, Harlan, not far removed from the front, directed with much noise a parallel war, enraptured in a Ufa-Reich of art, entertainment and wishful thinking. The colorful costumes, the blindingly blue Prussian uniforms, the deep red lips of the chief actresses, the unearthly, almost mythical appearance of Queen Luise (a daring moment on the director’s side), the slogans proclaimed by idealized humans ready to sacrifice all for their fatherland, and who are “lever dood as Slaav” (“Better dead than slave”), all this works today as a large-scale self-hypnosis and self-deception and pointless incantation of the national “mobilizing myth,” as if the epic images still had, in the last moment, the power to alter reality — as if the classic cinematic “last minute rescue” could also have led to a real-life happy ending. To paraphrase Céline, “mentir ou mourir” (“Lie or die”)?

It is somewhat surprisingly for today’s viewers that many Nazi propaganda movies were not as self-assured about Germany’s victory as one might think. Probably Kolberg is rather a document of helplessness than savage fanaticism. The country had entered a war that it was unlikely to win from the beginning, and its elites, especially Hitler himself, were fully aware of the immense risk they had undertaken. A sense of doom can already be noticed in the movies prior to the decisive battle of Stalingrad, and even prior to June 1941, when the Reich attacked its biggest enemy in a daring pre-emptive strike [3]. Harlan’s Der große König (The Great King, 1940–42) has rather dark undertones, while the Bismarck bio-pic Die Entlassung (The Discharge, 1942) ends with a gloomy foreshading of the Reich’s downfall — presumably not just the one from 1871, but 1933 as well. The only “consolation” offered is historical apotheosis, the glory in the eyes of the afterworld.

That applies as well for the anti-British Ohm Krüger about the Second Boer War shot in late 1940 and early 1941. It shares many similarities with Kolberg. Both are told in flashbacks, both tell of national uprisings against imperialist oppressors, uprisings that are finally defeated, as Kolberg actually fell into Napoleon’s hands in 1806. While Kolberg ends on a bit more  optimistic note than Ohm Krüger, with an outlook to the impending final victory over Napoleon, it in fact offers only a hypothetical victory that might one day maybe come. There was no happy-ending but just a vague hope for one. Compare this to a film made by the Russians called After the War at Six O’Clock which showed the defeat of Germany and was made as early as 1944 to be ready on time for the oncoming victory celebrations!

The impact of Kolberg suffered from this twisted construction. On one hand, there was the typically German evocation of a glorious downfall, a hopeless Nibelungen-like fight to the bitter end, on the other hand there was the ideological imperative to forcefully create hope for a victory. Trapped in this contradiction Kolberg works neither way: its appeals for victory ring false and make-believe, while it is not allowed to indulge at least into a full-blown, uncompromised Götterdämmerung. It was only in the morbid, non-political melodrama Opfergang (The Great Sacrifice, shot in 1942, released in late 1944) when Harlan was allowed the let loose and thus to make the better, definitive Third Reich “downfall” picture, though it was rather a “Liebestod” this time.

Kolberg also marks the end of images and traditions older than the NS-ideology. One sees in the film Breslau, Königsberg, and Kolberg, just months before their destruction. The film was not only the swan song of the “Preussenfilme” (“Prussian films”) that had enjoyed great popularity since the  early twenties, but also stands at the end of an era of German film: the cast features great names from the heyday of the Weimar cinema, which the NS Kulturpolitik had destroyed, figures one recognises from the classic films of Murnau, Lang, and Pabst, who garnered worldwide prestige and respect for German cinema: Heinrich George, Paul Wegener, Gustav Diessl, Otto Wernicke, Greta Schröder, Paul Bildt, Margarete Schön (from Lang’s original 1924 Nibelungen epic). Wernicke and Diessl appeared together in Fritz Lang’s last German film The Testament of Dr. Mabuse, whose central character ended up in a lunatic asylum, and according to Lang’s later interpretation was a metaphorical warning against National Socialism.

In the besieged cities themselves, including the real Kolberg, there was probably little interest in Heinrich George’s heroic grumbling and Kristina Söderbaum’s faux-naive blubbering. On the other hand, none of the defenders of Breslau needed to have explained to them why they fought. There was no make-up wearing screen-Napoleon in front of the city gates to assure the citizens on their surrender of an occupied peace without bloodshed. Defeat meant merciless death, rape and destruction, and this time you could’nt get away by a fast-forward dissolve into the happy ending. It is too easy to explain the despairing, dogged, and today seemingly incomprehensible resistance of the Germans solely through propagandistic indoctrination.

For decades Kolberg was scorned and reviled as were only a handful of other films from the Third Reich, and for that reason its deeply tragic aspect was as a rule never admitted. The apocalyptic terrors of the destruction of the German East were long and persistently pushed from the minds of (film) historians. One could and would see only the Goebbels-lies, whereas, in fact, through all the ideological „camp“ a shattering reality pierces through, of which all involved in making the film were directly conscious. In one scene Kristina Söderbaum sings to a child the old, magical song: “. . . father is at war, mother’s in Pomerania, Pomerania is burned to the ground . . .” She pauses, tears welling in her eyes: “Pomerania is burned to the ground.”

The great Heinrich George, who played Nettelbeck, died in 1946 in the then Soviet-run concentration camp Sachsenhausen. He left behind a poem with the lines:

If I ever again could be free,
Then what would remain for me?
You, my German homeland,
Whom I have loved with all my being!

After the war, Stalin produced heroic films in the vein of Kolberg which celebrated victory over “fascism,” for instance the 1948 color film The Battle of Berlin, which was ironically shot on captured German Agfa stock. This effort was far more naive though, and indulged heavily in the self-congratulations of the victors.

Yet another seemingly ironic aspect which one points out with Schadenfreude: few films have emphasized so clearly the “democratic” aspects of the NS-ideology. In the opening sequence of Kolberg one sees in “Breslau, 1813” columns and rows of costumed extras march in step, arms interlocking, forming a human wall, and singing like in a musical: “The people arise, the storm breaks . . .” A warlike human steamroller, which rumbles through the streets without mind or individuality. The scene’s effect today is as eerie as it is hysterically comic. While the song is heard in the background, General Gneisenau must put fire under the backside of the vacillating Prussian king: “A call for war? To the people? Why to the people? That is a matter for the army!” “The people will be the army — all the people!” Total war and total mobilization are connected with democracy, just as the assumption of “collective guilt” is with the vanquished. Where all stand together, all are somehow responsible, in good as in evil. From this point of view, the post-war allegation of “collective guilt” is only the flip side of National Socialist conceptions, and the people of the war generation are still partly perceived and judged through the mirror images that the NS-propaganda designed of them.

In the course of the film, the “Volk” is established as an entity which is always in the right. The Volk will never capitulate or surrender their freedom or homeland; it is always the alienated army officers, aristocrats, profiteers, shirkers, plotters, and know-it-alls. The latter are bad, corrupt, and cowardly, but “the Volk” is always good, always healthy, always ready “to do something for its own sake.” From the midst of the Volk, not from the ruling elite, come the ‘good’ leaders such as Nettelbeck, and anyone who is born to be a leader can become one, unhindered by any class boundaries. Kolberg is not a “trust in authority” film, propagating “blind obedience” and respect for authority at any price. Only when king, army, and State follow the will of the people do they cease to be scoundrels and become invincible. Kolberg demonstrates that National Socialism, too, was a quasi-Rousseauean ideology, based on the “mystique of democracy.”

As the good old democracy of the 20th century advanced in years, messengers were sent in every direction to find the cause of suffering in the world. When the messengers returned, they had to learn from east and west, north and south, from all computers, the unerring, as one says, that they themselves, the good old democracies, were the root cause of all the suffering of the twentieth century. (Hans-Jürgen Syberberg, Hitler: Ein Film aus Deutschland)

Kolberg returned to the cinemas in 1965 in an edition with commentary from Erwin Leiser, “provided with documentary insertions, so that the public could clearly see the parallels with NS-propaganda in the corresponding places” (Wikipedia). While other NS-films before and since have stood under a strict ban, Kolberg has even appeared on television. Wikipedia again: “Now, however, the German public is seen as being sufficiently enlightened, politically speaking. The film was therefore shown in its original form for its TV broadcast by ARTE.”