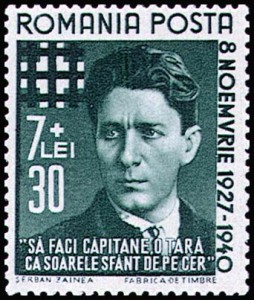 From the founding of the Legion onward, Codreanu’s life was a blur of activity. The Legion threw itself into community organizing and political action, including the occasional assassination and pogrom (another group to which the Legion can be likened is the Muslim mystical order of the Assassins [3]). The Iron Guard was banned and legalized. Codreanu and other Legion leaders were both thrown in prison and invited into cabinets. The “prison notes” were created during this period. In this volume, they occupy under 50 pages and do not stand alone as a literary work. They are little more than a footnote to Codreanu’s For My Legionaries: The Iron Guard [5]

, his principal work. But they are still powerful and necessary reading for all admirers of the C?pitanu and his cause. [6]The Iron Guard used its power to settle accounts, rehabilitating Codreanu and assassinating his enemies. But when they tried to oust Antonescu, they were defeated and their leaders were exiled. In the end, the Iron Guard ruled Romania for only 131 days. (In 1944, King Michael arrested Antonescu and handed him over to the Soviets. He was eventually put to death. The King himself was deposed and exiled in 1947.)