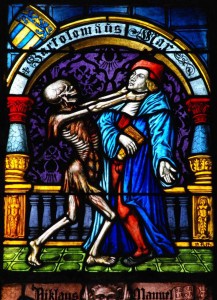 White Nationalists believe that the existing multi-racial, multicultural system has set our race on the path to extinction.

White birthrates world-wide are below replacement, while our homelands are being flooded with fast-breeding non-whites who undermine white wages and take far more from our welfare states than they contribute to them, meaning that indigenous whites pay the bills.

While non-whites enjoy a baby boom at white expense, we are being sold miscegenation, homosexuality, abortion, perpetual adolescence, interracial adoption, selfish careerism, environmental altruism—anything, really, as long as cradles are not filled with white babies.

Our standards have been debased, our morals debauched, our culture liquidated in order to feign equality with primitives. Every healthy form of white ethnic consciousness is stigmatized, while white guilt and non-white assertiveness are promoted. We are told that we are not entitled to our nations, our wealth, our standards, our way of life. We have no pride, no backbone, no birthright, no sense of destiny or purpose, no conviction that we make the world a better place.

We behave like a conquered people. A conquered people exists at the sufferance of others. A conquered people cannot say no. When a non-white demands something, we must give in. If this keeps up, we will become minorities in our homelands within a few decades. We will cede the power to determine our destiny to people who hate us, people who will plunder and persecute our ever dwindling descendants until our race simply ceases to exist—and then they’ll keep blaming us for their failures long after we are gone.

Whites are being victimized simply because we are white. And while Channon Christian and Christopher Newsom [4], who were tortured and murdered by blacks, obviously suffered more than heiress Casey Johnson [5] or poetess Sylvia Plath [6], who were killed softly by a poisonous cultural atmosphere of anti-white hatred, all whites are targeted for destruction, simply because we are white.

White Nationalism, therefore, has the potential to become a mass movement, encompassing all whites, since we represent and fight for the genuine and legitimate racial interests of all our people. Furthermore, White Nationalism can appeal to the most powerful passions that drive mass political movements: resentment, victimhood, anger, hatred of a system designed not merely to swindle and degrade us, but ultimately to destroy us.

Moreover, White Nationalism will never amount to anything unless it aspires to be a mass movement, harnessing resentment, victimhood, and hatred to smash the existing system and set our people free.

But this kind of politics does not sit well with many White Nationalists.

A lot of White Nationalists are just warmed over bourgeois conservatives who tremble for their bank accounts when they hear populist rumblings or catch wind of the politics of resentment. I have known shady capitalists who have enriched themselves in ways no decent society should permit. But to a man they are convinced that any objection to their way of life is motivated solely by envy and resentment, much as Jews always attribute anti-Semitism to the defects of their enemies.

Other White Nationalists tend to be elitists with a fondness for Traditional hierarchical societies: monarchies, aristocracies, classical republics. We are contemptuous of the rise of mass man and mass society: democracy, socialism, communism.

But if we are going to found a classical aristocracy, we need to learn martial arts, invent a time machine, go back 1,000 years, conquer a country, and then mellow for 900 years. Then politics can be based on the nobler sentiments, not the crude tastes and resentment of the rabble.

To my mind, no system of government was more perfect than the English monarchy at the middle of the 19th century—except, of course, for the fact that a hundred years later England was Airstrip One, liquidating its empire to rain fire and death on Europe, to the profit of Jews, Bolsheviks, and Americans, none of them conspicuously noble and cultured.

Once you follow your ideal aristocracy to its end and rejoin us in the present, we can set about the task of saving our race in the real world. To do that, however, we need to face the fact that we are the rabble, the uppity, ungrateful peasants slated by our Judeo-plutocratic overlords for replacement by dumber, browner, more docile fellaheen.

We need to rouse our rabble by making our racial brothers and sisters aware of their victimization. We need to free them from the white guilt that makes them easy marks. One does not really feel victimized unless one believes that one’s plight is wrong. We need to stoke their resentment and outrage until they are fighting mad.

“Now, Greg,” you might be wondering, “how does this agenda of crude rabble-rousing fit in with your professed elitism and your focus on ‘metapolitics’ and your endless stream of articles mentioning Nietzsche, Spengler, Evola, and Heidegger?” That’s a fair question. My answer is that metapolitics is necessary but not sufficient to save us.

Metapolitics as I understand it embraces two things: (1) intellectual activity, namely constructing our worldview and deconstructing the enemy’s, and (2) community organizing, namely building a White Nationalist community, a counter-culture and counter-community that will be the seed of a new White Nationalist order to come. Those things are absolutely necessary, but alone they are not enough to save us. To save us, White Nationalism must ultimately become a political movement.

I do think it is too early for a political movement, and that we should spend our time and money on metapolitics. At best, political activism today should be regarded as a kind of metapolitical education, since we need to have a tradition of people with concrete political experience if we are to someday get involved with politics and play for keeps. (Looking at it that way will also prevent the kind of burn out fostered by false hopes of actually making political headway in the present climate. Managing expectations is always crucial.)

But when the time for politics comes, it will necessarily be a form of modern mass politics fueled by resentment—in our case righteous resentment. My metapolitical role, and the aim of this little essay, is to make sure that we are clear about that fact right now and adjust our attitudes and plans accordingly.

It needs saying, because two writers whom I regularly read—Richard Spencer and Brett Stevens—have recently been critical of attempts to stoke white resentment at our ongoing dispossession, and their attitudes are not idiosyncratic but widely shared.

In “Poor Little Oppressed White People [7],” Spencer discusses Colby Bohannan of the Former Majority Association for Equality and Lou Calabro of the European American Issues Forum, both of whom seek to promote white ethnic consciousness in a multicultural society, the first by sponsoring a scholarship for whites, the second by lobbying for California schools to recognize European Americans as an ethnic group.

Spencer likens both men to “entitlement-mongers like Al Sharpton — poor, little oppressed White people will apparently now plead for handouts from the welfare state.” Spencer recognizes the potential of these projects to awaken white resistance to racial dispossession, but apparently it does not seem sufficiently high-minded or revolutionary for his tastes.

Stevens also identifies mass resentment politics with low-minded “liberalism [8],” which he contrasts to high-minded, elitist conservatism. He also claims that thinking of oneself as a victim is unhealthy [9]. In my view, however, it is being a victim that is unhealthy. Feeling victimized, by contrast, is not necessarily bad if it motivates one to get mad and get even. Besides, this is politics, not therapy. Frankly, I am willing to sacrifice some peace of mind if that is what it takes to win.

White Nationalism incorporates both populist and elitist elements. We are populists because we believe that a just society aims at the common good of our people—all of them. Yet the knowledge and ability to pursue the common good are the property of the few, not the many. So a genuinely populist society needs an elite to guide it. (By the same token, the masses need a say in politics to keep the elites from pursuing their factional good at the expense of the common good.) The only real choice is whether we are ruled by our own elite whose selfish tendencies are mitigated by kinship or an alien and hostile one with no such barriers to exploitation. Our model is a hierarchically differentiated, organically unified society, a body politic.

If we are to create this kind of society tomorrow, our movement needs to embody that same blend of populism and elitism today. We are not going to win without engaging in mass politics, and the masses are moved by resentment. There is nothing dirty about that, because our grievances are just. And even if it were dirty, a race that is fighting for its survival can no longer afford to be led by high-minded gentleman who take swords to gunfights because they would rather lose than violate their sense of honor and sportsmanship. Instead, we need leaders who are willing to make the same sacrifice as Frodo in The Lord of the Rings, who saved the Shire, but not for himself, for in the battle he lost something of his own soul.