The idea of world history held by English monarchs, whether they were Queen Elizabeth or the Stuarts James I and Charles I, as well as the English statesmen of their times, did not differ from that of most of their contemporaries. They were content to pursue their own policies, exploited whatever advantage came their way, pocketed the profits, and did their utmost to keep their offices. They would apply the law whenever the law was on their side, and protest indignantly against injustice whenever the law favored their adversaries. All that is quite natural. The ideas of God, law, and the world, the awareness of the advisable course of world history, characteristic of such highly gifted personalities as Thomas More, Cardinal Wolsey, or Francis Bacon, were no more modern than those shared by most of the politicians and diplomatists of any other European country involved in high politics.

It is true that Queen Elizabeth passes for the great founder of the English maritime supremacy, and she is well deserving of the name: after all, it was she who embarked upon the path of hostilities against Spain, the Catholic world power. It was during her reign, in 1588, that the Spanish Armada was defeated in the English Channel. Likewise, it was she who honored and sponsored such sea heroes as Francis Drake and Walter Raleigh. Fi­nally, it was she who in 1600 granted the East India Company its trade charter, which ultimately delivered the whole of India to the English crown. During the forty-five years of her reign (1558–1603), England was a rich country as never before. Previously, the English had been sheep-breeders who had sold their wool in Flanders. Now all the seas of the world converged upon the English Isle, unloading there the legendary booty of the English pirates and privateers. The Queen rejoiced and grew rich from it. In this respect, the Virgin Queen behaved like many of her impecunious subjects, nobles and commoners, men and women. They were all part­ners in the big business of plunder. Hundreds, nay, thou­sands of men and women became corsair capitalists. That too was part of the elemental drift from land to sea, which is the subject-matter of our story. 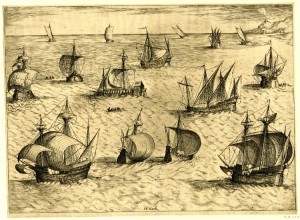 [2]The Killigrews of Cornwall are a handsome example of the predatory capitalism of the golden age, in its early stage. Their life-style and their world outlook offer us a more telling and faithful picture of the rul­ing strata of the times and of the true “elite” than a good many official records and various compilations that are too much tributary to the official jargon and to their time. The Killigrews were typical of their age, though in a different way than most of the diplomats, lawyers, and poets laureate. We should not forget, though, that their kin counted among them illustrious intellec­tuals and that the name of Killigrew features ten times or more in the British National Biographical Dictionary. Let us linger a while upon this highly interesting elite.

The Kililgrews were from Arwenack in Cornwall. During Elizabeth’s reign, the head of the family was Sir John Kililgrew, vice-admiral of Cornwall and hereditary royal governor of Pendennis Castle. He worked hand in hand with William Cecil, Lord Burleigh, Her Majesty’s chief minister. The vice-admiral’s father and uncle had been pirates themselves, and even his mother, according to reliable historical sources, had been at odds with the law against piracy. A branch of the family was active along the English coast, another, in Ireland, while several impecunious cousins and more distant relatives used their resourcefulness along the shore of Devon and Dorset. They were joined by all kinds of friends and confederates. They would organize surprise attacks, raids and other strokes, ransacking the ships that ven­tured into their waters. They supervised the distribution of the booty, and sold shares, stations and offices. Killigrew Hall at Arwenack stood directly on the shore in one of the sheltered nooks of Falmouth Bay, linked to the wide sea by a secret passage. The nearest building was Pendennis Castle, the seat of the royal governor. Equipped with a hundred cannon, the fortified castle served as pirate refuge in case of emergency. The noble Lady Killigrew had earlier helped her father, a much-hon­ored “gentleman pirate,” before she herself became the zealous associate of her husband whom she did proud. She gave shelter to pirates in her house, as the perfect hostess that she was. Inns and refuges had been set up in all the harbors of the region. 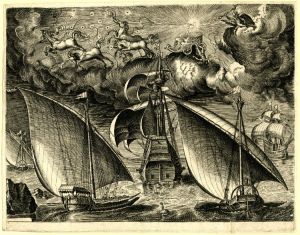 [3]Seldom would the dealings of the Killigrews be inter­fered with. Only once, in 1582, did they come to grief. I shall tell you briefly what happened. A Hanseatic ves­sel of 144 tons, owned by two Spaniards, was cast by a storm into Falmouth Bay. At the time, England and Spain were at peace. The Spaniards cast their anchor just in front of the Killigrew mansion at Arwenack without giving it a second thought. From her window, lady Killi­grew saw the boat, and with her trained eye, she was quick to realize that it was loaded with expensive Dutch cloth. During the night of the 7th of January 1582, the Killigrew retainers, headed by lady Killigrew herself, attacked the unfortunate ship, massacred the crew, threw their corpses overboard, and returned home to Arwenack loaded with the precious Holland cloth and other trophies. As for the boat, it disappeared under mysterious circumstances in the Irish Sea. The two Spanish owners were lucky enough not to have been on board at the time of the at­tack. They had been spending the night on land, at a small hotel. They filed a complaint with the competent court in Cornwall, which after an inquiry, concluded that the vessel must have been stolen by unknown people, and that after all said and done, it was impossible to cast any light upon the facts. The two Spaniards happened to have highly placed political connections, and so managed to bring the matter to the highest attention in London, so much so that a new Inquiry was ordered. Lady Killigrew and her accomplices were made to appear before the court in another jurisdiction. She was found guilty and sentenced to death. Two of her assistants were exe­cuted, and she herself was only pardoned at the last moment. This is the sadly true story of lady Killigrew. For the first fourteen years of Elizabeth’s reign the largest part of the English navy was actively engaged in piracy and illegal transactions, and no more than 50,000 tons of the total were set apart for legal trade. The Killigrews embody in an exemplary way the home front of the great age of piracy that saw the fulfillment of a thirteenth-century English prophecy: “The lion’s cubs will turn into the fishes of the sea.” At the end of the Middle Ages, the lion’s cubs were tending sheep in the main, and the fleece, sold in Flanders, was processed there into cloth. It was only in the sixteenth and the seventeenth centuries that this nation of shepherds recast itself into a sea-roaming nation of privateers, into “children of the sea.” [4]The oceanic feats of the English are of a relatively late date and indeed were slow to start. For already a century, the Portuguese had been racing round the world, albeit more often along the shores. From 1492 on the Spaniards took over, thanks mostly to the great Conquista, the conquest of America. The French sailors, the Huguenots, and the English followed suit. But firstly in 1553 England set up the Muscovy Company as the basis of an overseas policy that enabled her to pull herself forward and equal the other colonial powers. It was only after 1570, as we have already seen, that the English crossed the Equator. The first practical document that attests to the new world outlook of the English was Hakluyt’s Principal Navigations. It saw the light of print in 1589. In matters of whale-hunting and ship-building, the Dutch had been the teachers of the English, as of other nations.

Notwithstanding, it was the English who in the long run surpassed them all, defeated their rivals, and secured world supremacy for themselves based on their domination of the oceans. England became the heiress. It was England that inherited the legacy of the great sea hunters and sailors, the pioneers and the discoverers from all the European nations. The maritime exploits and the dare-devilry of the seafaring Danish, Dutch, Germans, and Norwegians amassed into what one day was to become the British maritime domination of the world. No doubt, the great colonial

empires of the other European nations continued to exist: Spain and Portugal, for instance, preserved their huge overseas possessions but lost control of the seas and the communication routes. When in 1655 Cromwell’s forces occupied Jamaica and kept her, his gesture was already affirming England’s overall policy regarding the world’s seas and oceans, and implicitly her maritime victory over Spain. The Netherlands, which by 1600 had reached the zenith of their maritime power, were forcefully “continentalized” a century later. The Dutch were com­pelled to defend themselves against King Louis XIV of France and so had to erect strong land fortifications. In 1689, their stadholder, William III of Orange, became king of England, and from that year on he took up residence on that big island. William pursued an English policy and ceased to promote any peculiarly Dutch policy. France, on the other hand, did not follow up the strong maritime impetus associated with Huguenot Protes­tantism. Ultimately, in keeping with her spiritual tra­dition, she pursued the line of Rome, took sides against the Huguenots, with the Night of St. Bartholomew in 1572 and Henry IV’s conversion to Catholicism. By the same choice, she decided in favor of land and against the sea. Of course her maritime potential remained quite consid­erable, so that even during the reign of Louis XIV, she was capable of confronting the English fleet. But when in 1672 the French king sacked Colbert, his great secretary of trade and of the navy, the choice in favor of the land element became irreversible. The long colo­nial wars of the eighteenth century confirmed it. As for Germany, her contribution was squandered in the religious wars and the political wretchedness of the Empire.

So it came that England became the heiress, the univer­sal heiress of that great change in the existence of the Europeans nations. How was that possible? The phenomenon cannot be explained by drawing sweeping comparisons with earlier historical examples of naval supremacy, whether one thinks of Athens. Carthage, Rome, Byzantium, or Venice. The case of England is in itself unique. Its specificity, its incomparable character, has to do with the fact that England underwent the elemental metamorpho­sis at a moment in history that was altogether unlike any other, and also in a way shared by none of the earlier maritime powers. She truly turned her collective existence seawards and centered it on the sea element. That enabled her to win not only countless wars and naval battles but also something else, and in fact, infinitely more—a revolution. A revolution of sweeping scope, of planetary dimensions.