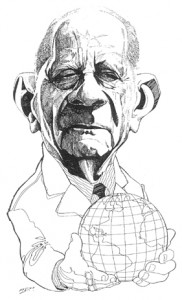 “Why can’t we all get along?”–Rodney King

Carl Schmitt’s short book The Concept of the Political [5]

(1932) is one of the most important works of 20th century political philosophy.

The aim of The Concept of the Political is the defense of politics from utopian aspirations to abolish politics. Anti-political utopianism includes all forms of liberalism as well as international socialism, global capitalism, anarchism, and pacifism: in short, all social philosophies that aim at a universal order in which conflict is abolished.

In ordinary speech, of course, liberalism, international socialism, etc. are political movements, not anti-political ones. So it is clear that Schmitt is using “political” in a particular way. For Schmitt, the political is founded on the distinction between friend and enemy. Utopianism is anti-political insofar as it attempts to abolish that distinction, to root out all enmity and conflict in the world.

Schmitt’s defense of the political is not a defense of enmity and conflict as good things. Schmitt fully recognizes their destructiveness and the necessity of managing and mitigating them. But Schmitt believes that enmity is best controlled by adopting a realistic understanding of its nature. So Schmitt does not defend conflict, but realism about conflict. Indeed, Schmitt believes that the best way to contain conflict is first to abandon all unrealistic notions that one can do away with it entirely.

Furthermore, Schmitt believes that utopian attempts to completely abolish conflict actually increase its scope and intensity. There is no war more universal in scope and fanatical in prosecution than wars to end all war and establish perpetual peace.

What does the distinction between friend and enemy mean?

First, for Schmitt, the distinction between friend and enemy is collective. He is talking about “us versus them” not “one individual versus another.”

Third, the distinction between friend and enemy is existentially serious. Violent conflict is more serious than other forms of conflict, because when things get violent people die.

In sum, the ultimate root of the political is the capacity of human groups to take their differences so seriously that they will kill or die for them.

It is important to note that Schmitt’s concept of the political does not apply to ordinary domestic politics. The rivalries of politicians and parties, provided they stay within legal parameters, do not constitute enmity in Schmitt’s sense. Schmitt’s notion of politics applies primarily to foreign relations — the relations between sovereign states and peoples — rather than domestic relations within a society. The only time when domestic relations become political in Schmitt’s sense is during a revolution or a civil war.

If the political arises from the abiding possibility of collective life or death conflict, the political rules over all other areas of social life because of its existential seriousness, the fact that it has recourse to the ultimate sanction.

For Schmitt, political sovereignty is the power to determine the enemy and declare war. The sovereign is the person who makes that decision.

If a sovereign declares an enemy, and individuals or groups within his society reject that declaration, the society is in a state of undeclared civil war or revolution. To refuse the sovereign’s choice of enemy is one step away from the sovereign act of choosing one’s own enemies. Thus Schmitt’s analysis supports the saying that, “War is when the government tells you who the bad guy is. Revolution is when you decide that for yourself.”

The root of the political as Schmitt understands it is what Plato and Aristotle call “thumos,” the middle part of the soul that is neither theoretical reason nor physical desire, but is rather the capacity for passionate attachment. Thumos is the root of the political because it is the source of attachments to (a) groups, and politics is collective, and (b) life-transcending and life-negating values, i.e., things that are worth killing and dying for, like the defense of personal or collective honor, one’s culture or way of life, religious and philosophical convictions, etc. Such values make possible mortal conflict between groups. [6]The abolition of the political, therefore, requires the abolition of the human capacity for passionate, existentially serious, life and death attachments. The apolitical man is, therefore, the apathetic man, the man who lacks commitment and intensity. He is what Nietzsche called “the last man,” the man for whom there is nothing higher than himself, nothing that might require that he risk the continuation of his physical existence. The apolitical utopia is a spiritual “boneless chicken ranch” of doped up, dumbed down, self-absorbed producer-consumers.

Schmitt’s notion of the political is consistent with Hegel’s notion of history. For Hegel, history is a record of individual and collective struggles to the death over images or interpretations of who we are. These interpretations consist of the whole realm of culture: worldviews and the ways of life that are their concrete manifestations.

There are, of course, many interpretations of who we are. But there is only one truth, and according to Hegel the truth is that man is free. Just as philosophical dialectic works through a plurality of conflicting viewpoints to get to the one truth, so the dialectic of history is a war of conflicting worldviews and ways of life that will come to an end when the correct worldview and way of life are established. The concept of human freedom must become concretely realized in a way of life that recognizes freedom. Then history as Hegel understands it—and politics as Schmitt understands it—will come to an end.

Hegel’s notion of the ideal post-historical state is pretty much everything a 20th (or 21st) century fascist could desire. But later interpreters of Hegel like Alexandre Kojève [7]

and his follower Francis Fukuyama [8]

, interpret the end of history as a “universal homogeneous state” that sounds a lot like the globalist utopianism that Schmitt wished to combat.

Why the Political Cannot be Abolished

If the political is rooted in human nature, then it cannot be abolished. Even if the entire planet could be turned into a boneless chicken ranch, all it would take is two serious men to start politics—and history—all over again.

But the utopians will never even get that far. Politics cannot be abolished by universal declarations of peace, love, and tolerance, for such attempts to transcend politics actually just reinstitute it on another plane. After all, utopian peace- and love-mongers have enemies too, namely “haters [9]” like us.

Thus the abolition of politics is really only the abolition of honesty about politics. But dishonesty is the least of the utopians’ vices. For in the name of peace and love, they persecute us with a fanaticism and wanton destructiveness that make good, old-fashioned war seem wholesome by comparison.

Two peoples occupying adjacent valleys might, for strategic reasons, covet the high ground between them. This may lead to conflict. But such conflicts have finite, definable aims. Thus they tend to be limited in scope and duration. And since it is a mere conflict of interest—in which both sides, really, are right—rather than a moral or religious crusade between good and evil, light and darkness, ultimately both sides can strike a deal with each other to cease hostilities.

But when war is wedded to a universalist utopianism—global communism or democracy, the end of “terror” or, more risibly, “evil”—it becomes universal in scope and endless in duration. It is universal, because it proposes to represent all of humanity. It is endless, of course, because it is a war with human nature itself.

Furthermore, when war is declared in the name of “humanity,” its prosecution becomes maximally inhuman, since anything is fair against the enemies of humanity, who deserve nothing short of unconditional surrender or annihilation, since one cannot strike a bargain with evil incarnate. The road to Dresden [10], Hiroshima, and Nagasaki was paved with love: universalistic, utopian, humanistic, liberal love.

Liberalism seeks to reduce the friend/enemy distinction to differences of opinion or economic interests. The liberal utopia is one in which all disputes can be resolved bloodlessly by reasoning or bargaining. But the opposition between liberalism and anti-liberalism cannot be resolved by liberal means. It is perforce political. Liberal anti-politics cannot triumph, therefore, without the political elimination of anti-liberalism.

Violence, of course, is generally associated with frankly totalitarian forms of anti-political utopianism like Communism, but the Second World War shows that liberal universalists are as capable of violence as Communists, they are just less capable of honesty.

Liberalism, however, generally prefers to kill us softly. The old-fashioned version of liberalism prefers the soft dissolution of differences through cultural assimilation, but that preference was reversed when the unassimilable Jewish minority rose to power in the United States, at which time multiculturalism and diversity became the watchwords, and the potential conflicts between different groups were to be managed through spiritual corruption. Today’s liberals make a fetish of the preservation of pluralism and diversity, as long as none of it is taken seriously.

Multicultural utopianism is doomed, because multiculturalism is very successful at increasing diversity, but, in the long run, it cannot manage the conflicts that come with it.

The drug of consumerism cannot be relied upon because economic crises cannot be eliminated. Furthermore, there are absolute ecological limits to the globalization of consumerism.

As for the drugs of relativism, individualism, tolerance, and the multi-cult: only whites are susceptible to their effects, and since these ideas systematically disadvantage whites in ethnic competition, ultimately those whites who accept them will be destroyed (which is the point, really) and those whites who survive will reject them. Then whites will start taking our own side [11], ethnic competition will get political, and, one way or another, racially and ethnically homogeneous states will emerge.

To become a White Nationalist is to choose one’s friends and one’s enemies for oneself. To choose new friends means to choose a new nation. Our nation is our race. Our enemies are the enemies of our race, of whatever race they may be. By choosing our friends and enemies for ourselves, White Nationalists have constituted ourselves as a sovereign people—a sovereign people that does not have a sovereign homeland, yet—and rejected the sovereignty of those who rule us. This puts us in an implicitly revolutionary position vis-à-vis all existing regimes.

The conservatives among us do not see it yet. They still wish to cling to America’s corpse and suckle from her poisoned tit. But the enemy understands us better than some of us understand ourselves. We may not wish to choose an enemy, but sometimes the enemy chooses us. Thus “mainstreamers [12]” will be denied entry and forced to choose either to abandon White Nationalism [13] or to explicitly embrace its revolutionary destiny.

It may be too late for mainstream politics, but it is still too early for White Nationalist politics. We simply do not have the power to win a political struggle. We lack manpower, money, and leadership. But the present system, like all things old and dissolute, will pass. And our community, like all things young and healthy, will grow in size and strength. Thus today our task is metapolitical: to raise consciousness and cultivate the community from which our kingdom—or republic [14]—will come.

When that day comes, Carl Schmitt will be numbered among our spiritual Founding Fathers.