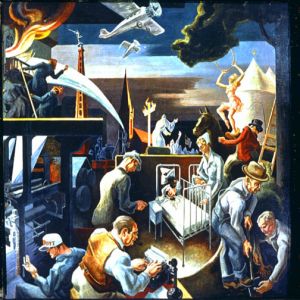 The following essay is a rewrite of a piece written under a pen name in 2003.

One of the worst clichés of contemporary politics is, “The United States is a nation of immigrants.” The implicit argument is: “If we look back far enough in our family trees, we will find that all of our ancestors got off a boat. So doesn’t it seem arbitrary and unfair to declare that America won’t take any more immigrants? After all, what if they said that before your ancestors came here?”

And that is a bad thing.

No society is improved by racial, cultural, and religious diversity. These merely become fault lines along which social frictions and upheavals regularly occur.

America would be improved by fewer Blacks, Asians, Mestizos, and Jews, not more of them.

But there is another kind of diversity that needs to be faced when talking about immigration. This kind of diversity can exist between two people of the same race, religion, and culture. It is a diversity of economic and political interests. Just because we are all immigrants or descended from immigrants, that does not imply that we all have the same interests.

Each new immigrant inevitably dilutes the political and economic power of the people who were here before. This is still true no matter how much a new immigrant may later contribute to society. When Nikola Tesla stepped off the boat, life became a little bit more competitive for engineers and inventors — even though Tesla’s inventions eventually made everybody’s life easier.

A favorite argument of immigration advocates is to seek out Italian, Polish, Irish, or other “ethnic” (i.e., non-Anglo-Saxon) Americans, and say: “They wanted to keep you out too, you know, so how can you side with people who want to keep out Somalis and Haitians and Mexicans?” Of course, in doing so, immigration advocates tip their hand. They know diversity is a source of weakness among whites. It undermines our solidarity, and our enemies seek to exploit that.

To my ears, there is nothing more grating today than a white American talking about his “Anglo-Saxon” identity. It is grating for two reasons. First, most of them are Euro-mutts anyway. Second, pure Anglo-Saxons like me are the people who gave this country away in the first place, and if “we” are going to take it back, we are not going to do it alone. Perhaps, then, we should begin by shutting up, setting aside our old prejudices against fellow whites, and learning to work with the Irish and Italians and Poles who as a rule are far less hamstrung by “white” guilt, emotional repression, and reluctance to take our own side in a fight.

That said, I can still grant that the Anglo-Saxons of the past had good arguments for wanting to exclude other white ethnic groups. They knew that ethnic diversity was a source of social conflict and weakness, even when the diversity was among fellow whites. The same arguments are even more cogent today when applied to non-white immigration, since non-whites cannot be assimilated without the destruction of the white race and white civilization.

When it was founded, the United States was primarily an Anglo-Saxon society. If we really take seriously the idea that diversity weakens a society and homogeneity strengthens it, then we must conclude that the US should have striven to become even more homogeneously Anglo-Saxon. And that implies that if the US permitted immigration at all, it should have been only from Great Britain. That means no Irish, Germans, Poles, Swedes, Norwegians, Italians, Greeks, etc. need apply.

But immigrants from Europe are not like non-whites. The peoples of Europe have common racial and cultural roots that make it possible for Irishmen, Germans, Italians, and Frenchmen to all become Americans. Europeans can be assimilated. But non-whites can never become Americans, except in a purely legal sense. This means that immigration from the whole of Europe was not an unmitigated disaster for the United States.

I do not deny that many immigrants who would have been excluded by this argument made enormous contributions to this country. But, by the same token, there is no way to calculate the Anglo-Saxon geniuses who may have been lost because of the social dislocations caused by immigration. Furthermore, it is possible to point out real contributions by Jews and other undesirables, but does that constitute an argument for letting them in? If the contributions of a Jonas Salk do not trump considerations of homogeneity, then why should the contributions of a Nikola Tesla?

America’s large and prosperous working class would have developed much sooner, along with a large and prosperous middle class of farmers and shopkeepers. Both groups would have had the resources and the leisure to protect their rights and liberties from the plutocrats and do-gooders and war-mongers. America would have been a freer, less divided, more harmonious, and happier society.

Now white America is a mixture of people from all over Europe, slowly being submerged in a rising tide of mud.

If we are going to survive as a race, we have to unite as one. In this context, I understand why my fellow White Nationalists are hesitant to revisit old debates about immigration. How does it help the cause of white unity in today’s America to look at failed arguments to exclude the Irish, the Slavs, and the Italians?

The Americans of the past wanted to hold onto their Anglo-Saxon identity, and they failed. With each new generation, there is more and more mixing between the descendents of different European immigrant groups. What is emerging is a generic white American, with a sense of his interests merely as a white. The linguistic and cultural divisions of the Old World are fast disappearing, and with them the ability of our enemies to exploit them.

But how is this a gain? America may be the place where we recreate the original unity of the white race before it was divided and pitted against itself. In order to preserve and advance this emerging (or re-emerging) white unity, we need to stop and then reverse the influx of non-whites into the United States.

And how white is white? Most of the peoples of the Middle East, Central Asia, and South Asia have to be categorized as Caucasians. Even pure-blooded Dravidians of South India, unmixed either with the Aryans or with the Australoid aborigines, are Caucasian, even though their complexions are sometimes blacker than Blacks’. There is, in short, quite a lot of diversity within the Caucasian race.

But we should remember that in politics diversity brings weakness and homogeneity brings strength. Therefore, we should be quite hesitant to accept any immigrant simply because he or she is Caucasian in the broad sense.

Since the population and culture of white America is still primarily Northern European, I would like to see immigration policies that preserve and strengthen that element. If we value greater homogeneity, the quickest way there is to promote immigration from Northern Europe.

Then there is the issue of quality control. Obviously, the United States has no interest in importing stupid people. But should we really be encouraging smart people to come here either? Would it be proper for a White Nationalist America to compete with other white nations for their best minds? Shouldn’t we be concerned to see all white nations prosperous and well governed? But that means that every white nation will need its own elite. So America should not be a “brain drain.”

Of course if other white nations have backward and oppressive systems that waste their native talents, it seems only humane to allow talented people to move here. But shouldn’t our first priority be to encourage such societies to improve themselves? And if they do, shouldn’t we encourage the immigrants to return home to work for the advancement of their own people?

There is another, more fundamental question that must be raised before we discuss immigration policy: Why does a healthy nation need immigration at all?

It may be that immigration is not a social good, but a symptom of social ills. In America today, immigration serves to cushion the system from the consequences of its own failures. For instance, progress requires more and more intelligent people, yet intelligent Americans have disastrously dysgenic breeding patterns. Progress requires more and more educated people, yet America’s educational system is ever worse. Instead of addressing these problems, we simply import brains from South and East Asia. But if America needs more brains, we should grow them here, not import them.

Immigration is really just a question of distribution. But distribution presupposes production. So the ultimate question is this: How do we put our house in order, take control of our own destiny, and produce more and better white children? Until we deal with that problem, the whole question of white immigration is moot.